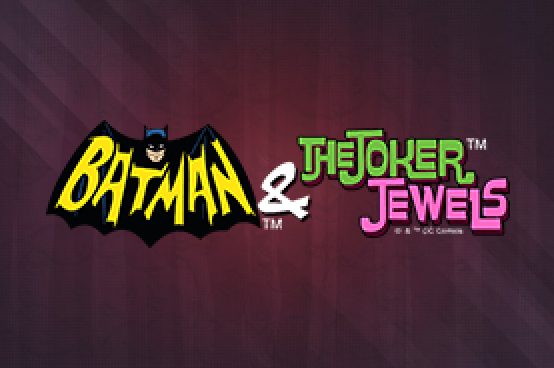 Batman and the Joker Jewels

Is there a more iconic set of villains than Batman and the Joker? While the dark knight certainly had his pick of great and iconic adversaries to face off against, you can’t argue the dynamic between the pair has been unmatched, and made its way across comic books, to movies, video games, and now, slots as well. Released in 2016, it offers 5 reels and 25 paylines, as well as the whispered promise of raiding the killer clown’s stash in hopes of unearthing some juicy progressive jackpots. And if that little slice of luck doesn’t work out, the special features based around Wilds and Scatters will certainly have you laughing like a maniac.

PLAY BATMAN AND THE JOKER JEWELS SLOT FOR FREE (NO DOWNLOAD & NO DEPOSIT NEEDED!)

Play the Batman and The Joker Jewels slot game for free, right here on our website (No Download Necessary & No Deposit Needed). Increase or decrease your bet and change the number of lines. When you’re ready, hit the “Spin Button”. Enjoy!

With 25 fixed paylines, the cash flow can be adjusted solely by bumping the coins up or down, and leave it to Playtech to try to play both sides of the coin like a certain disfigured Batman villain. Playable for R2.5 to R1,250, it makes it quite clear that it wants to appeal to high and low rollers alike. The more you put into the game, the more it gives back through one of its four progressive jackpots. With a 95% RTP, and each spin contributing 0.99% of what you put in into the jackpots, it incentivises players to play for big money. Regular wins aren’t that boring either, as Playtech’s release offers a nice mixture. The lower paying symbols, based around gadgets both heroes and villains used, can be a bit disappointing, but big icons like Wilds pay quite well, and a five of a kind Wild win grants you a 2500x increase on what you won, which is insane value for your money.

The slot isn’t afraid to show off quite a few fun and interesting bonuses either. The first one requires you to snag three Scatters, which can only appear on the first, third and fifth reel. Once you’re there, you pick between the caped crusader or the clown prince of crime – which adds a x5 multiplier increase to your choice. From there, two different Wilds start appearing – Batman Wilds, which you have already seen in base gameplay, and Joker Wilds, which only appear during this bonus game. Each Wild pushes your multiplier meter in one direction or the other – the symbol you have chosen pushes it towards the x5 increase, while the opposite pushes you away from the x5 multiplier prize. This special feature keeps going until you either reach a x1 or a x5 multiplier, so you could theoretically be playing for free for a long time.

Along with this, Playtech’s release can also randomly trigger Joker Random Wilds. His iconic laugh will certainly b ringing through your ears as when it occurs, up to nine Joker Wilds can appear on the playing field. Much like Batman’s Wilds, they replace all other symbols except for Scatters, and bring a nice cash prize when they are part of a win.

We quite liked Batman and the Joker Jewels. The choice to go for the 60’s show over the modern day grim revisions of the caped crusader works out well, as it fills the slot with a bit of a mischievous glee as it runs around showing you how well it reincarnated the old fan favourite. While the progressive jackpots eluded us, the fact there are four is both a blessing and a curse – you are guaranteed a win either way, but it can feel a bit stinging to get the lowest jackpot of the four offered choices. During normal gameplay, we didn’t find much of a need to complain about wins either – you could argue there are a lot of lower paying icons that aren’t worth it, but it balances out with the lucrative special features. All things considered, while it won’t be changing the world or becoming a classic anytime soon, this Playtech release is great for fans of the show who want to try a few spins. Our rating: 85/100