Age of the Gods: Storms 2 Review 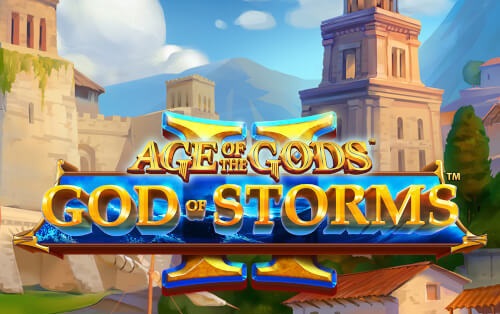 Join the mythical Greek king Aeolus on another stormy celestial adventure in Age of the Gods: Storms 2. You can play with 5, 10, 15, 20, or 25 paylines; land a full reel Argo ship wilds and trigger the Wild Wind Respins, which increases the number of rows up to 8. If you don’t win one of 4 progressive jackpots, hope to win 4,100 times your bet.

Play Age of the Gods: God of Storms 2for Real Money at One of These Top Online Casinos:

Age of the Gods: God Storm 2 Theme and Symbols

Age of the Gods: God of Storms 2 Free Spins and Bonuses

Age of the Gods: God of Storms 2 does not have a free spins game. There are two wilds: A standard wild and the Argo ship wild. The best feature of the game is the Wild Wind Respin Feature. Other features consist of the Extended Reels game and 4 progressive jackpots.

Land at least one fully stacked Argo ship wild on reels 2, 3, or 4 to trigger the Wild Wind Respins game. You get a number of respins, on which Aeolus, the keeper of winds and storms appears on the right, and blows strong winds on the reels. Every time the storm hits the reels, the Argo ship wild is blown 1 reel left. The number of rows and respins increases.

The storms and respins stop when the Argo ship is blown off the reels. Every respin can result in a winning combination.

All games in the Age of the Gods franchise have progressive jackpots, which are randomly triggered on any spin. You select up to 20 coins and try to match 3. There are 4 progressive jackpots in the God of Storms 2 game, and there is a high chance for you to win one of them, once you enter the feature. The Ultimate Power Jackpot is the biggest by far, and awards an average of €488,000 once in 40 days.

How to Play Age of the Gods: God Storm 2

You can choose to spin manually or in auto mode. South African players don’t have the option of turbo mode, which makes for hyper spins. You can also turn off the soundtrack if you want. Select your bet amount and start spinning. All symbols have monetary values, which are attached to the number of paylines you are playing with.

Spin then reels and hope to get at least three identical symbols to land left to right on a single spin. Two premium symbols also trigger a win. Your win amount depends on the value and number of the winning symbols. Hope to get the stacked Argo ship wild on the 4th reel to play with the greatest number of rows and paylines. The maximum potential of the game is 4,100 times your bet. The highest progressive jackpot can give a maximum win of 6 figures.

Play Age of the Gods: God Storm 2 in Demo Mode for Free

You get to know the rules, the gameplay, and how much you can expect to win, all without risking any of your money. Google the name of the demo game you want to play, and you will get a list of review websites, where demo games are a standard offering. You can also play demo games in most online casinos.

Slot games have sets of low-paying and high-paying symbols. The symbols have monetary values for identical landings on 2, 3, 4, 5 or more reels. The 10 to A card symbols pay less; the high-paying figures are the vases, archer, Hydra, Artemis, and the Spartan warrior in that order. The lowest paying symbols are 10 and J, which pay 0.2, 0.6 or 2x for landing on 3, 4, and 5 reels respectively. The corresponding wins for the Spartan warrior are 0.2, 1, 8 or 20 times the stake.

The higher your bet value and the number of paylines, the more you win. The win amounts remain the same in the bonus games, unless there are win multipliers attached. The win frequency increases, as do the numbers of rows and paylines you can win on. The highest you can win in the regular game is 4,100x. The higher progressive jackpot win is €488,000 on average.

Age of the Gods: God of Storms 2 volatility is on the higher end; the biggest payout come from the bonus features, particular the Extended Reels Feature. The return to player of the game is 96.14%; the progressive jackpots count for 1.01%, bringing down the actual RTP to 95.13%. The hit frequency is pegged at 26.3%, which means over 1 in 5 spins provide a win.

Why do South African players enjoy playing Age of the Gods: God of Storms 2?

All the slots of the Age of Gods series have the same ancient civilization theme. Some other games with the same theme are Legend Hydra: Power Zones by Playtech, Shield of Athena by Play ’N Go, Medusa Megaways by Nextgen, and Medusa: Fortune and Glory by Yggdrasil, among others.

Does Age of the Gods: God of Storms 2 have a no deposit free spins bonus?

We could not find any no-deposit free spins for Age of the Gods: God of Storms 2.

Is a free play version available?

Free play versions are available at most sites and at Playtech Casinos, unless it’s not offered in your region.

Can I play Age of the Gods: God of Storms 2 for real money?

The game is supposed to be played for real money.

How much money can I win playing Age of the Gods: God of Storms 2

Is there a jackpot?

There are 4 progressive jackpots.

What’s the theme of this slot game?

Greek mythology, ancient ships, and storms are the themes of this game.

What are some of the best features in this game?

The Extended Reels game is the best feature of the game since you can win with the maximum number of reels and paylines.