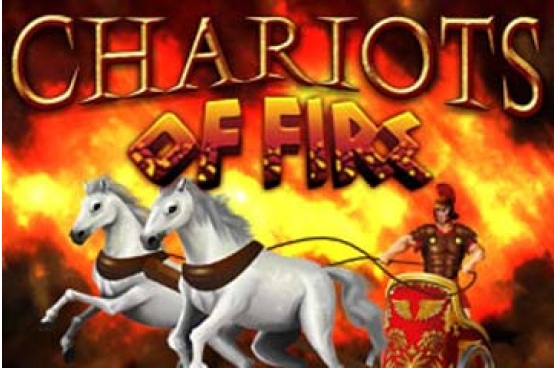 Prepare for a trip to ancient history! Your tour guide on this journey to the Roman Empire will be Rival Gaming, which will take you to the Emperor’s army packed with fearless soldiers. Put your fighting equipment on and get ready for an epic battle, where you will have a chance to win the affection of your Emperor, who is more than prepared to reward all of his loyal soldiers battling under his expending Wild Banner. Chariots of Fire is a five-reel slot with 25 adjustable paylines, playable from R2.5 per spin. The 2017 release offers two rewarding special features – the Free Spins feature that comes with 8 free spins and 2x multiplier, and the Roman Victory feature, with multipliers and Wild reels.

PLAY CHARIOTS OF FIRE FOR FREE (NO DOWNLOAD & NO DEPOSIT NEEDED!)

Play Chariots of Fire slot game for free, right here on our website (No Download Necessary & No Deposit Needed). Increase or decrease your bet and change the number of lines. When you’re ready, hit the “Spin Button”. Enjoy!

In order to join the ranks of this Roman army, you will have to fully understand the rules of the game. Chariots on Fire features five reels, three rows and offers 25 adjustable paylines. If you are already an experienced soldier, than we would advise you to play with all 25 paylines, simply to secure bigger wins. Also, take under consideration the coin value, ranging from R0.1 to R2.5. There is also the possibility to set the number of coins you want to bet per payline (1-10). The minimum players can wager is R2.5, of course, if they decide to use all available paylines. As for the maximum bet, it is set at R625. The slot pays left to right, starting from the leftmost reel, and three of a kind is the minimum for landing payouts.

Set in front of an ancient Roman temple, the reels of the 2017 release are filled with plenty of authentic symbols from the era. The Emperor is the most valuable symbol, offering 800 coins for five of a kind. The Princess is also generous, rewarding punters with 600 for the maximum combo. A Horse is also there, as well as the Crossbow, Helmet and Shield, while 10-A playing cards serve as low-paying symbols. The Banner is an Expanding Wild, appearing on reels 1, 3 and 5 and expanding every time there is a possibility to form a winning combination. The Soldier is a Scatter that triggers free spins, while the Super Soldier is in charge of the Roman Victory feature.

The Soldier Scatter can appear on every reel, and you will need only three of them to trigger the Free Spins feature and get 8 freebies. If you land more Soldiers on the reels, you will have the same number of free spins, but the instant coin reward gets bigger, up to 25 coins. Now, it is important to remember that all wins made during the feature will come with a 2x multiplier, so every win will be doubled. Also, the central reel will turn into a Wild reel, giving more possibilities for creating winning combinations.

If, by any chance, punters manage to land three Super Soldier Scatters during the Free Spins feature, they will trigger the Roman Victory Bonus round, and get 2 Victory spins. This means that spinners will have a chance to conquer Rome with massive wins. During this round, the first and the third reel become Wild reels, so you can only imagine the winning possibilities and the amount of loot you will take for yourselves as a reward for the victory. Also, all wins during the Victory spins are doubled, and you will go home packed with coins.

The Chariots of Fire is a really fun and exciting video slot. Visually impressive, the 2017 release boasts crisp colourful graphics and a soundtrack that keeps adding excitement to the game as you spin the reels. We love the fact that the Wild Banner expands and turns into Spears, covering the entire reel for more winning opportunities. The Free Spins feature and the Roman Victory Bonus are also great, and you can really win a lot while fighting for this fierce but generous Emperor. On the other hand, the Emperor will not grant you your free spins and your bonuses as often as you would have liked, so take great care of your balance. Our rating: 84/100