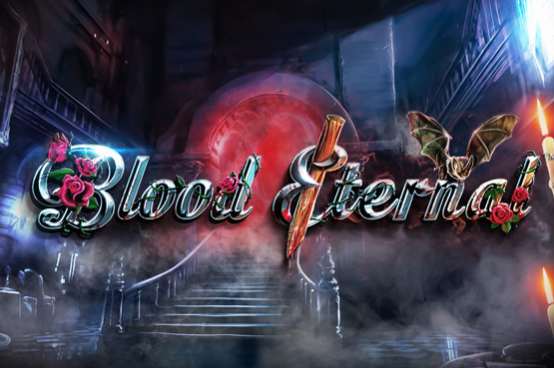 Blood Eternal is a vampire-themed video slot released by Betsoft in September, 2017. The game boasts exquisite 3D graphics and smooth animations accompanied by a thrilling yet modern soundtrack which adds to its overall atmosphere. The reel set consists of 6 reels and 3 rows set against the interior of a scarcely lit castle with candles. As soon as you start spinning the reels you will love the game as it pays left to right and right to left along 30 fixed paying lines. Featuring the portraits of two vampires and two humans, the Blood Eternal slot is also home to bats which can create up to 12 symbols long lines and award up to 10,000 coins per line. The Vampire Free Spins feature is quite entertaining and potentially rewarding with sticky Wilds and extra Wilds added to the reels.

Play Blood Eternal Slot game for free, right here on our website (No Download Necessary & No Deposit Needed). Increase or decrease your bet and change the number of lines. When you’re ready, hit the “Spin Button”. Enjoy!

Once you enter this strange place you will see theme-related symbols depicted as the gate to the castle, crosses, gargoyles, bottles with holy water and vials with blood. Along with bats, these are high paying symbols while the rest of the reels are populated with playing card icons designed in gothic style to match the theme of the game. Bats can appear as single and double symbols, so you can collect as many as 12 of a kind along a paying line. Just like other Betsoft releases, Blood Eternal offers up to 5 coins per payline and the coin denomination ranges between R0.20 and R10 allowing you to wager from R6 up to R1,500 per spin. The Auto Play option is available providing you with automatic spins instead of spinning the reels manually as well as the Max Bet button which sets your bet to the maximum level instantly. To win a prize you need to land 3 or more identical symbols in succession on a winning line starting from the leftmost or the rightmost position.

The biggest attraction of the game is its free spins feature triggered when a vampire meets a human. Both vampires and humans stand for Scatters and while vampires land only on the reels 2 and 5, humans appear only on the reels 3 and 4. So, if a vampire, male or female, lands next to a human of opposite sex, you are granted 8 free spins. The two Scatters will stay in their positions acting as sticky Wilds and on each spin they will generate up to 4 extra Wilds which can complete your multiple winning combinations. Regular Wild is also included and it always counts as one bat symbol. Players who like to risk can use the Double Up feature to gamble their winnings entirely or a half of them in the game of guessing heads or tails.

Blood Eternal is a perfect game for all fans of the vampire genre. It will provide you with loads of entertainment along with the opportunity to hit some hefty payouts. After Fire & Steel which offers the free spins feature triggered by the combination of two special symbols, Blood Eternal is the new game from the provider with a unique way of delivering free spins. Once you enter them, you are granted payouts due to extra Wilds which will complete your winning combinations left to right and vice versa. Muster the courage to enter the haunted castle and win up to 965,620 coins in a single spin from the comfort of your home or on the go. Our rating: 90/100