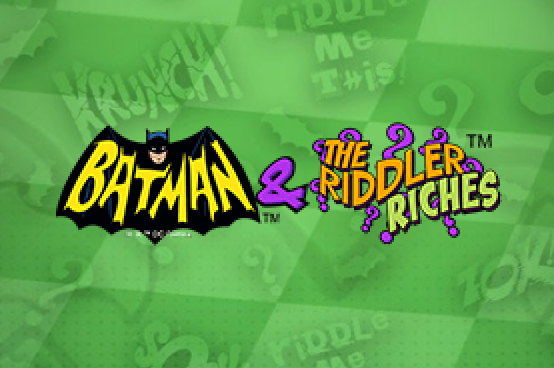 When something works, don’t fix it. That seems to be the lesson Playtech took out of the past two Batman games and continue to apply in their series, as it adheres to the same basic rules, while changing things around just enough to make it feel fresh and different when you compare them to each other. This 2016 release boasts a progressive jackpot, alongside collapsing reels, boxes filled with mystery, fun and rewarding special features and a sense of uncertainty anyone would feel when a man in green tights laughed maniacally next to them and forced them to solve riddles to avoid death.

PLAY BATMAN AND THE RIDDLER RICHES SLOT FOR FREE (NO DOWNLOAD & NO DEPOSIT NEEDED!)

Play Batman and The Riddler Riches slot game for free, right here on our website (No Download Necessary & No Deposit Needed). Increase or decrease your bet and change the number of lines. When you’re ready, hit the “Spin Button”. Enjoy!

Unlike the previous two releases in the series, Batman and the Riddler Riches has 243 ways to win over 25 fixed paylines, which does alter the base gameplay somewhat, alongside the collapsing reels and the possibility of mystery symbols. The first difference is visible in the amount of cash you can bet, the lower limit stayed at R2.5, but the upper most limit is at R600, which we’re certain some high rollers will be grumbly about. The RTP continues to float around the 95% mark, and there are still four progressive jackpots that you can potentially win by picking different coloured coins and hoping you get lucky. The big wins are mostly sat there and in the special features the slot offers, while normal gameplay fails to really make that same mark for us. There are less icons and they pay less overall, which is made up for by the fact that you win more often due to collapsing reels and a higher RTP.

In terms of bonuses that it has on offer, Playtech goes for a few safe but fun ones. It doesn’t quite match up the somewhat wacky fun of Batman and Catwoman Cash, but it holds its own surprisingly well. The mystery symbols are one of the special features on offer, which can make a random appearance at any time during normal gameplay. The reels are flooded with green boxes, and all of them contain the same icon inside them, which can transform a loss or a mediocre win into a much more satisfactory one.

The other bonus occurs when three Scatters appear on the first, second and third reel. You spin a wheel that will choose between three different power-ups to help you siphon the Riddler’s evil schemes. The first one involves Sticky Wilds, which can appear on any spin and persist on the playing field until you reach the third wave, after which they fall away. Another is the multiplier extra turn, which increases the multiplier on your wins the higher up you go to a maximum of x5. Finally, you can pick between several Riddler boxes, and each one you open has a certain amount of cash in it. When you connect three that have the same value, you win that one, and then you open the rest of the boxes for a potential multiplier.

While it doesn’t have the charisma of the Joker or the crazy fun of Catwoman, Batman and the Riddler Riches shows it is more than capable to pull its own weight on the table. The villain is just as cooky as the other two, if not even more, and the charm of bad 60s television stays with you even after you finished playing it. The game goes its own route, and thanks to the collapsing reels, 243 ways to win and a different set of special features, it still felt like a welcome addition to the roster rather than trying to milk the name for a few quick bucks. That said, the faults you might have had are still there. Normal gameplay isn’t that rewarding in terms of wins, and the lowered maximum bet will probably annoy some high rollers, but we feel the fact it was changed up and shaken about with the new systems works out for the best of the slot. We can only hope Playtech continues to be as impressive as they have been so far. Our rating: 88/100