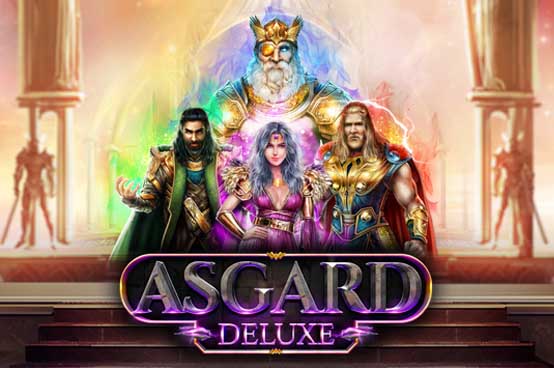 Asgard Deluxe is one of several classic Real Time Gaming slots that the casino software provider has recently redeveloped. While the original game offered plenty of features, and gameplay reminiscent of Microgaming’s Thunderstruck II, the remastered edition is simplified and far more prosperous than both its predecessor and that Microgaming favourite.

The Asgard Deluxe slot has a far more thematic backdrop than the original release and better-drawn characters. The larger-than-life Norse deities are well represented on the reels of this release, while the playing card symbols maintain the elementary design found in the previous Asgard slot. The wagering menus have also been given a lick of work to make them mobile-friendly for a modern slot gaming audience.

Of course, there is more to Asgard Deluxe than simple revamped graphics and animations. While the latest effort utilises the same 243 ways to win payline structure as the original, it now comes with a randomly triggered progressive jackpot. Moreover, the non-progressive prizes in the base game are worth more, at 2,000x a bet compared to the original 1,250x a stake prizes.

Another significant alteration to the Asgard Deluxe slot is a more flexible free spin round. In the original game, you could gradually unlock free spin rounds. The more times you activated the bonus feature, the better the rounds would become. That format has been cast aside in Asgard Deluxe in favour of a click and win bonus. You will still get the same four great free spin rounds, but you can choose them outright rather than unlocking them as you play.

Ultimately, this makes Asgard Deluxe more user-friendly and less time consuming than the previous release. Throw in the added goodies, and it is not difficult to see why this is the superior of the two titles and a game that could easily give the much-loved Thunderstruck II a run for its money.

Asgard Deluxe is not the first game RTG has decided to renovate of late. Jackpot Cleopatra’s Gold and Jackpot Piñatas are just two titles in Real Time Gaming’s portfolio that have been given a makeover and re-released as deluxe editions. These titles feature many of the same changes that you can expect to see in Asgard Deluxe. It is also important to note that Asgard Deluxe is not replacing the original game. You can still find and play Asgard at RTG casinos if you prefer that to this more modern, mobile-friendly game.

Play Asgard Deluxe for Free (No Download & No Deposit Needed)

As touched on, one of the perks of playing Asgard Deluxe is that it is mobile-friendly. This contrasts with the original game, which had small, mouse-friendly buttons and wagering options. While that worked well at the time, it certainly did not lend itself to players who prefer finger and thumb action on the go.

This has been fixed with Asgard Deluxe. The reimagined slot does not require an app for you to get involved, either. Instead, RTG has been sure to develop this game using HTML5, so the Asgard Deluxe should run out of the box merely using whatever browser your tablet or smartphone happens to have at hand. No downloads should be required.

Like most Real Time Gaming developed slots, Asgard Deluxe is playable as a free slot game. We recommend taking advantage of this opportunity. If you have played the original and want to know how this deluxe edition differs, playing the game for free will allow you to discover that. Moreover, playing the free slot demo version of this RTG release can see you practice triggering each of the game’s four free spin rounds, allowing you insight into which of them is best suited to your playing style.

You should not have to look hard to find the Asgard Deluxe slot online. It will be available to play for free via multiple sources, not least RTG powered online casinos and the developer’s website. Again, we suggest having a crack at it to educate yourself on what Asgard Deluxe can offer you before you stake your hard-earned cash on this slot release.

How to Play Asgard Deluxe

Like Thunderstruck II, this popular Norse mythology-themed slot utilises a 243 ways to win payline structure over its five reels. This means that you do not necessarily need to line up three or more symbols on a payline to pocket a prize. Instead, simply landing three identical symbols on adjacent reels (from the first reel onwards) will be enough. As it is a 243 ways to win game, none of the slot’s so-called paylines can be altered.

Asgard Deluxe has three rows of five symbols across its reels. Most of the time, these will be covered by high playing card symbols, including purple nines, green tens, yellow jacks, pink queens, blue kings, and red aces. You can expect to score wins worth up to 150 coins with those symbols. Mjölnir (Thor’s Hammer), Valhalla, and the usual array of Norse gods (Odin, Thor, Loki, and Freya) make up the more prosperous symbols, with up to 500 coins the prizes here. Oddly enough, it is not Odin or Thor who make up the best-paying symbols, with the scatter taking this honour if five are struck anywhere on the screen. The top non-progressive prize is capped at 2,000x a bet, but there is also a progressive prize up for grabs, and we will come to that shortly.

Having a crack at Asgard Deluxe will see you wagering anything from $0.30 up to $7.50 a spin, making the game well-suited for low rollers, as well as those who wish to splash a little more cash. To help you land wins, you can look to various wild symbols, scatters, and free spin bonuses. With that in mind, let us look at those next.

Multiplier wilds (green Ws) appear in the base game and can take the form of any symbol you need to win, save for scatters. Any wilds appearing in a winning combination will double the value of those wins. There are additional wild symbols, but these only appear in bonus rounds, and we will come to those in turn.

Yggdrasil, the great Tree of Life, takes up a role as Asgard Deluxe’s scatter emblem. Three or more are all it takes to activate the Picking Bonus in this game. Remember, scatters are also the best-paying icons in the slot and can deliver wins worth up to 2,000x a bet if five appear anywhere simultaneously.

Once triggered, Asgard Deluxe’s Picking Bonus will let you choose from four different free spin options. This contrasts with the original Asgard slot, where they were unlocked progressively. Note that extra games are added to your tally if you retrigger the free spin round while it is in play. You will not get to pick a new round. Let us look at your four available options:

You will get fifteen free spins with anything you win tripled. Three or more scatters will add a further fifteen spins to your tally.

Opt for this free spin bonus, and you will start with twenty spins. In this mode, a Symbol Replacement wild can appear on the third reel and randomly turn other icons into wilds that can replace all, save for Multiplying Wilds and scatters. Just two, three, four or five scatters will add a further one, two, three or four spins to your counter.

In this bonus, you will get twenty-five free games. Random symbols on the second to fourth reels (barring scatters) will transform into wilds on any win. These could boost your wins by 2x, 3x, 4x, or even 6x the rate of pay. If you land several multipliers here, their totals will be multiplied together. An extra five spins can be won with three additional scatters.

Play the fourth option to enjoy thirty free spins with a cascading reels mechanic in action. Here, any winning symbols are paid out then removed from the screen. New ones will take their place at random. You can build up a multiplier by chaining together successive wins, from 2x on the first cascade, up to 5x on the fourth, and so on. Up to eight extra spins can be won via three or more scatters.

There is a progressive jackpot appearing in Asgard Deluxe. Of course, it is uncapped and can be won at random. Any randomly triggered jackpot prize will be added to whatever else you win (if anything) on that spin.

Asgard Deluxe is undoubtedly an improvement on the original slot. While Asgard was on par with Microgaming’s Thunderstruck II (arguably the benchmark for a Norse mythology-themed slot), this game goes beyond that. The chance to win a randomly triggered progressive and choose from four quintessentially different bonus rounds is not to be sniffed at, making Asgard Deluxe well worth a punt.