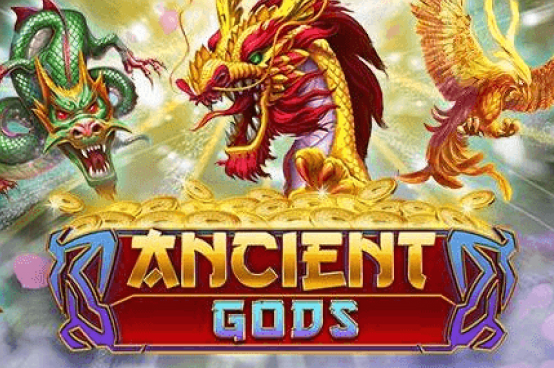 RTG’s Ancient Gods video slot is about Ancient Gods. It’s not about Zeus, Odin, or Horus though. Rather, it’s about the ‘Immortal Beasts of Eden’ or celestial animals in the form of Dragons, Tigers, Turtles, Snakes, and Phoenixes living in the fantasy universe filled with godly riches beyond human imagination. Therefore, the gods in this case are more like the Four Holy Beasts of Eastern Lore than the Human Gods of Western Mythologies.

The team of animal deity protectors is specifically known in-game as the Guardians of the Holy. Your task as the player is to find Golden Medallions (Scatter) and unlocks the universe’s special treasures and the Center Dragon (Free Spins) to get as much payouts as you can, all reaching to multipliers of 7,500 times the bet per line.

Play the RTG Ancient Gods slot game for free, right here on our website (No Download Necessary & No Deposit Needed). Increase or decrease your bet and change the number of lines. When you’re ready, hit the “Spin Button”. Enjoy!

The 5-reel, 25-payline RTG video slots game known as Ancient Gods includes wilds, scatters, free spins, multipliers, and a mobile version. There’s no bonus game unless you consider the free games feature with free spins you can retrigger during the round as a bonus game.

To play the game, you need to get combinations of the following symbols ranked by how much they pay: The Red Dragon, Green Dragon, Phoenix, Tiger, Turtle, and Snake. You can also hit up the low-value orbs associated with each of the animal gods. The Golden Medallion is the symbol that triggers the Free Games feature whenever you hit 3 to 5 of the medallions on a reel. The 5-medallion combo gives you a 3x multiplier on all wins.

The Ancient Gods slot features crisp graphics that aren’t static and full of effects that should make you feel more immersed with the game every time something happens. We’ve already mentioned the max 7,500 times the bet per line payout coming from the Free Games feature as well, since all the biggest multipliers occur in that round.

When you combine free spins you can retrigger with multipliers galore, then your chances of getting that 7,500x payout should increase exponentially. Aside from that, there’s also the mobile version of Ancient Gods that provides you with a faithful reproduction of the gameplay from the desktop version on a smaller screen. That means you can play the game across all devices and can even get it by Download or by Instant Play to try it out.

The game is quite simple to play and easy to pick up not because its game mechanics is generic but instead because it’s designed for you to hunt for those Golden Medallions and Center Dragons in order to activate the Free Game feature, where you can compound your winnings and chances of winning by as many free chances and multipliers as your luck would allow. It’s therefore too bad that it lacks action outside of the Free Game round and it uses a common theme. Regardless, it is still a nice addition to the RTG family.