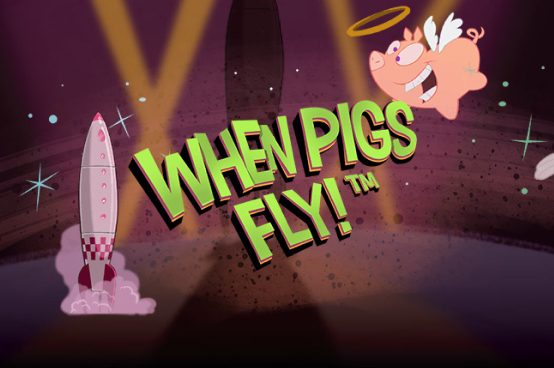 When Pigs Fly is another one of high-quality production slot games coming from the creative kitchen of one of world’s leading online casino software suppliers NetEnt. This cartoon-style slot presentation features breath-taking visuals and video animations that add to the depth of this particularly amusing title. When Pigs Fly is played on the rhomboid-shaped reel grid which expands to the full 5×5 playing pattern after successive wins. Each win you make will trigger a re-spin which goes up to 6 complimentary rounds during which the number of paylines will also increase. Pigs will most definitely fly if you manage to unlock the Free Spins feature with embedded 3,125 ways to win.

Play Pigs Fly Slot game for free, right here on our website (No Download Necessary & No Deposit Needed). Increase or decrease your bet and change the number of lines. When you’re ready, hit the “Spin Button”. Enjoy!

First time you launch a playing screen at When Pigs Fly you will be dazzled by the game’s visual quality. The game’s graphics are so clean and neat that you will think you’re inside an animated movie. A rocket preparing for launch and a pig in a space suit definitely add to the overall appeal.

Game commands and controls are situated in the bottom part of the playing screen where you get to adjust the coin value and bet value. Coins start at R0.1 and go up to R20, whereas the betting levels go up to 10.

The playing screen initially comes with a 1-3-5-3-1 reel setup, whereas the grid will fill up to 5×5 after each successful spin. The game pays from left to right for a combination of three matching symbols on an active payline.

The symbols include a pig’s cap with angel wings on it, question mark balloons, a flying bar symbol, a beautiful lady, a pig in his space suit and a When Pigs Fly logo, which happens to be the icon of the highest value, offering 1,000 coins for five in a row. Additionally, the game offers a selection of classic playing cards, which are the low-value denominations.

And, of course, When Pigs Fly come with a Wild symbol that replaces all others and appears only on reels 2, 3 and 4 to help you boost your winning potential.

When Pigs Fly is a rather simple and straightforward slot game, even though it may strike you as a completely different presentation. Less is definitely more when it comes to NetEnt who deserve great praise for their wonderful job with this 5-reel game.

When Pigs Fly is all about a Re-Spins feature which is active after each win you make. Your winning spin will activate a re-spin feature which goes up to six in a row. As you go on hitting the winning combinations, the reels grid will gradually expand and increase the number of winning ways – from 135, 405, 675, 1,125 and 1,875 all the way up to the sixth consecutive winning spin.

A winning combination after the fifth re-spin will activate 8 Free Spins, which are played with whopping 3,125 winning ways. This staggering number is more than enough to be a significant boost for your winning chances during this special feature.

When Pigs Fly is a medium variance slot. NetEnt have created a highly unusual game which can be too much to cope with at first, but once you get deeper inside it will knock you down with its simplicity and straightforwardness. These two traits come as values and utterly positive sides of the game. With 3,125 ways to win in a dynamic and highly engaging slot in which players can hope to land wins well over 962 times their stake which. When Pigs Fly is considered yet another superb addition to NetEnt’s impressive slot portfolio. its unique theme and a cartoon-like styled apparel make it one of its kind which is always a good thing and don’t let anyone tell you otherwise. When Pigs Fly is close to being a perfect slot game and could definitely benefit from a multiplier or two somewhere in there. Our rating: 96/100