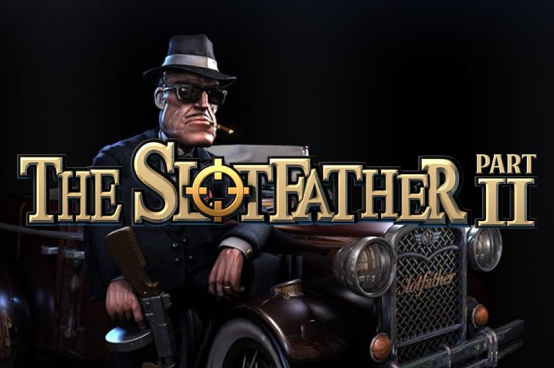 The Slotfather II slot game from Betsoft is a sequel to a highly popular original title released back in 2011. Centred around a mobster theme, this great-looking piece is a clear association to iconic cinematographic gem called the Godfather. Betsoft should be praised for great work on their new slot title which comes with top-notch graphics and 3D cinematic experience which will help you get fully immersed inside the gameplay. The Slotfather II is played on 5 reels with 243 ways to win it. It boasts four bonus features which can offer rather hefty rewards for the luckiest of players and it is fair to say this is an overall exciting slot game.

Play The Slotfather II Slot game for free, right here on our website (No Download Necessary & No Deposit Needed). Increase or decrease your bet and change the number of lines. When you’re ready, hit the “Spin Button”. Enjoy!

The Slotfather with a cigar in his mouth and a machine gun in his hand is situated on the left side of the reels just to intimidate you. Don’t be afraid as you enter the mobster’s cave though since there are potentially great riches waiting for you.

The game features a bit darker apparel, with symbols on the reels that include a framed picture of the Italian landmark the Leaning Tower of Pisa, a butcher’s cutter, a glass of whiskey presumably, some money, playing cards and the big man himself which is the highest paying symbol worth 300 coins.

The game pays for at least three matching symbols in a row from left to right, but there is a great twist to it since the Slotfather II offers a chance to double your money through a Double Up Game.

After any standard win you can press the Double Up button and gamble your winnings with a Heads or Tails game. Your stakes will be doubled if you hit it right, whereas you all know what happens if you fail.

In addition to the standard game symbols, the Slotfather II comes with a Wild symbol, a truck Scatter and a Big Boss Bonus symbol, which is basically a briefcase filled with cash.

There is so much more in this game to be looking for however. A Gangster Bonus is active once you land at least two fully stacked Gangster symbols. Fat Tony, Frankie and Snake Eyes Sammy are there to reward you with a re-spin during which you will be hoping for the third gangster for a dynamic in-game bonus.

You will be taken to a room with a triggering gangster at a business to collect your prize from a selection of folders in front of you. Each gangster has his own way of collecting, which only adds to the overall dynamic of the game.

The fans of Francis Ford Coppola’s legendary flick will love the feel the Slotfather provides. This mobster-themed slot game is truly a different game to most of other available as it combines the latest graphical technology with an innovative playing engine for an ultimate experience. Impressive visuals are followed by no less than 4 bonus games, which will either take you to a different screen or reward you with free spins after which you will have a guaranteed cash prize to claim. A clever and well-thought out slot game offers plenty of fun to the players of different generations. And with the coin value starting at R0.2 up to R10, the Slotfather II from Betsoft will reach out to a wider audience. Our rating: 91/100