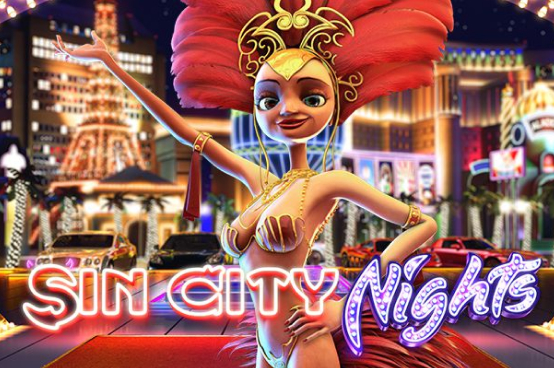 Sin City Nights slot from Betsoft is an explosion of different sensations and a game that appeals to all of your senses. It will hit you with neon lights of the Las Vegas strip and get you fully immersed into the ultimate casino feeling any self-respecting gambler and gamer should try at least one in his life right there on the spot. Still, for those who can’t afford a trip to Las Vegas for one reason or another, Betsoft have created a valuable substitute as Sin City Nights truly is a worthy representation of what Las Vegas stands for with its cascading reels, exploding icons, exploding multipliers and everybody’s favourite free spins.

Play Sin City Nights Slot game for free, right here on our website (No Download Necessary & No Deposit Needed). Increase or decrease your bet and change the number of lines. When you’re ready, hit the “Spin Button”. Enjoy!

Bright colours and impressive 3D visuals will hit you hard as soon as you launch the playing screen. Three rows and five reels of symbols stacked upon each other are presented by a beautiful hostess on the right on the reels which will greet your every win and dance to your success.

Symbols on the reels include neon representations of classic playing cards which are the standard low-paying symbols, whereas the high-valued icons are true representatives of the classic Las Vegas – cherries, bell and lucky seven which incidentally is the top-paying symbol worth 2,500 coins for five in a row.

This bright Betsoft title comes with 25 fixed paylines and will reward you with winning every time you land at least three matching icons from left to right. One of the great things about this game is Exploding Icons. Symbols inside a winning combination will explode and others will drop from above into their place rewarding you with a re-spin basically which is a great twist to the base game. Another great twist is the increasing multiplier which goes up to 5x with each successive win.

Casual players and beginners will love the fact coins range from R0.1 and go up to R10, which is something more suitable for high rollers. Nevertheless, all kinds of players will get a chance to try their luck at this highly amusing slot.

Sin City Nights offers great excitements from the off and base game truly does good justice to the title of this Betsoft slot. In addition to exploding icons and multipliers in the main game, Sin City Nights offers a fantastic feature which is available whenever you hit a winning combination. It is called Double Up and it basically is a classic gamble feature.

Playing a simple Heads or Tails game on a coin toss, you are given a chance to double up your entire winnings or a half of it. Best thing about this feature is that it can go on as many times as you like and will only stop when you fail to guess the correct side of the coin.

Sin City Nights has plenty of action in its base part that it is hard to imagine what kind of a special feature would be suitable for this title. With exploding symbols and multipliers and gamble feature all available, Betsoft obviously thought this game only lacks a Free Spins feature. And they were rights.

Players who land three Free Spins Icons on reels 1, 2 and 3 will be hit with 10 free spins during which the Exploding base game feature is highlighted through the fact you get to claim 3x, 6x, 9x and 15x multiplier instead of the regular 1x, 2x, 3x and 5x.

You always know where you stand with Betsoft and this highly reputable developer has hit it once again with Sin City Nights. It’s a slot classic, dealing with a universally popular Las Vegas theme but with a modern spin to it. Starting from the impressive visuals and enchanting soundtrack, Sin City Nights is also an exciting game which will keep you on the edge of your seat, wanting to jump into your screen. Exploding symbols and exploding multipliers are an excellent addition to this game, whereas it is the Free Spins that complete the whole picture, making sure this game does not lack entertaining at any time. Our rating: 91/100