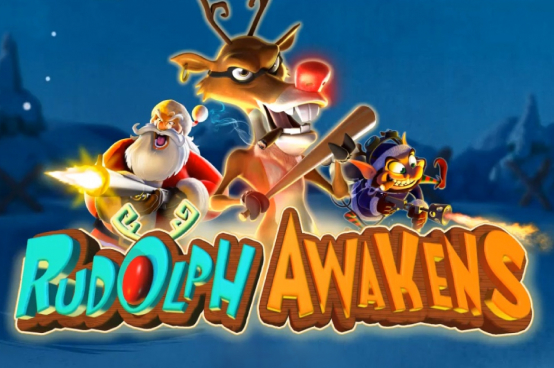 RTG has not disappointed this season – they have brought Christmastime into online gaming with the launch of the Rudolph Awakens online slots game.

Rudolph the Red-Nosed Reindeer, adoringly referred to as simply “Rudolph” has an interesting and surprising history. What many people don’t know about Rudolph is the character was originally created by Robert L. May for the Montgomery Ward store chain. The reindeer character was created in 1939 as a way to save the chain money on their Christmas promotions. The chain had been giving away colouring books each Christmas season that they had purchased. Deciding it would be more cost-effective to instead create their own colouring books, Rudolph and his entertaining story was used in the books.

May’s own history of being picked on as a child was used as inspiration for Rudolph and his own story in which he is also picked on only to rise as the hero of the story. The popularity of Rudolph only continued to grow, and this is how he has become a household name to this day. The popular character has since become the focus of many songs, movies, and even games. RTG decided to also put out a slots game that offers online casino players the ability to have a great time while enjoying Rudolph on the reels. This game is called, “Rudolph Awakens”.

You can have a great time on the Rudolph Awakens online slots game while enjoying the character in a manner that’s quite different than what you may be used to. In this game, there is a conflict between Rudolph and Santa Claus. The trouble begins at the start of Christmas season as gifts are supposed to be delivered to children throughout the world. Also making an appearance in the game is Mrs. Clause, as well as gifts, penguins, and other colorful characters and high-ranking card symbols.

Free online slots games are great because they give you the chance to see what it is that’s so exciting about a game before you commit to it with cash. This is why you’ll be glad to learn that an online slots game you are interested in can be played for free. Having the ability to try the game out for free can not only introduce you to its look but will also show you the benefits and other features that the game has to offer, up close and personal. You’ll feel better about your decision to play the game for real money once you are given the opportunity to try it out for free first.

Rudolph Awakens is one of the amazing online slots games that you will get to test-drive for free. Realtime Gaming can be proud of this game for many reasons, and you can get a feel for what some of them are when you give it a try without the need to use the money to try it out.

In order to try the Rudolph Awakens slots game for free, you aren’t going to need to worry about depositing any money in the casino first. In fact, you won’t even have to download the software thanks to the game being an instant-play one and this means it pulls up and plays right in your browser.

HOW TO PLAY RUDOLPH AWAKENS SLOT

You can have a lot of fun playing Rudolph Awakens for free, but playing it for real money takes that excitement up to a while other level. Knowing you can still continue to have all that fun but also be eligible to win a huge jackpot will really spice things up for you.

Many of the RTG powered online casinos offer you the ability to play Rudolph Awakens. Once you have found a casino that you want to play the game at, just click on the game’s title and you can load it right in the web browser and begin having a great time.

Rudolph Awakens is a flexible online slots game that caters to players who are working with a wide range of bankrolls. Those with conservative budgets can play it while fitting it right in their gaming budget. High rollers will also find the game an attractive one because it awards them the ability to bet larger amounts.

The jackpot on this slots game gives players the chance to hit a jackpot that is good for 50,000 x and this is one more thing many players are happy to see. The game can be played on computers and on mobile devices.

While it’s true that the Rudolph Awakens online slots game is based off a beloved character that is shown in an amusing light, it’s also true that there are bonuses players can enjoy along the way that add even more to it.

The game is a 5 reel slots game with 30 paylines. The wild symbols are the Rudolph symbols and will replace the others to make winning combinations. The wild symbols also expand to cover the entire reels on 2, 3, and 4 and can also nudge to a win or trigger free spins. Watch in excitement as Rudolph is jailed in frozen ice until the elf awakens him.

RTG did a fantastic job offering a slots game that features a much-loved Christmas character in a way that is both fun and unique. Plus, the game has everything it takes to quickly become a fan favorite. From the bold and colorful graphics to the bonuses and large jackpot, the game has it all.