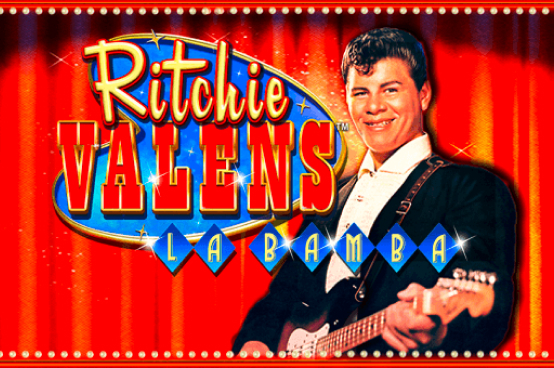 Do you remember the legendary song La Bamba performed by Ritchie Valens? If you are a fan of the song, now you can play the online video slot inspired by it and its creator and performer. Ritchie Valens’ La Bamba is a 6-reel slot machine providing you with a chance of hitting wins in staggering 729 ways, which means that you can create winning combinations left to right and right to left. The 2018 release inspired by the musician who died in a plane crash in 1959 with The Big Bopper, another talent whom RTG dedicated a video slot two years earlier, will provide you with loads of entertainment and multiple opportunities to win. It offers Expanding Wilds that will double your payouts and free spins with up to 3x multipliers. While playing it, players can win as much as 6,000x your bet.

Play the RTG Ritchie Valens’ La Bamba slot game for free, right here on our website (No Download Necessary & No Deposit Needed). Increase or decrease your bet and change the number of lines. When you’re ready, hit the “Spin Button”. Enjoy!

The game features a 6×3 layout with winning combinations created as long as you land matching symbols on adjacent reels starting from the leftmost or the rightmost position. It uses a standard RTG control panel allowing you to adjust your bet and activate automatic spins instead of spinning the reels manually. You can also increase the speed of the reels if you want them to spin faster. The reels are home to the symbols related to the theme of the game including guitars, TV and radio sets as well as Ritchie’s shoes, photos and concert tickets. The graphics and overall appearance of the game are quite impressive and convey the spirit of the era along with original songs performed by the protagonist of the game.

Ritchie Valens’ La Bamba features two special symbols, Wild and Scatter. Wild is represented as the musician himself and it expands whenever it lands on the reels to complete more winning combinations. Not only that Wild replaces all the symbols to help you create a winning combo, but it also doubles payouts from the combinations in which it is included. Besides, Wild will substitute for Scatters. However, it does not appear on the leftmost reel. Scatters are represented as the logo of the game and you need four or more of them to trigger the free spins feature. You will win 20 free spins with payouts subject to 1x, 2x or 3x multipliers.

We really liked The Big Bopper slot when it appeared and two years later, RTG has come up with another music-themed title that promises loads of fun and entertainment along with some lucrative payouts. The story of Ritchie Valens and The Big Bopper is a sad one, but their music will make you want to dance today just like more than 50 years ago. The 2018 RTG release will keep you glued to the screen of your desktop or mobile device with great visuals and sounds accompanied with rewarding bonus features boosting your winning chances on every spin. Our rating: 88/100