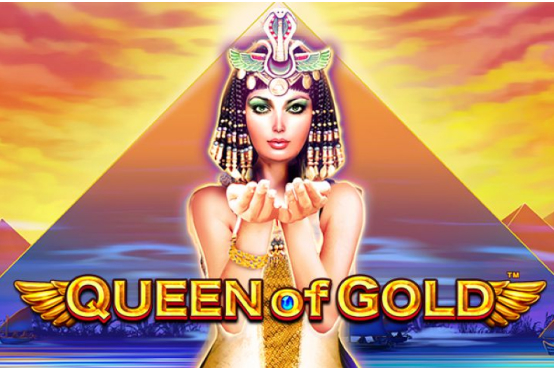 Queen of Gold is a dynamic slot game coming from Pragmatic Play. It features 6 reels and 25 paylines built inside an ancient Egyptian theme and presented through spectacular graphics. Pragmatic Play have made sure Queen of Gold looks good, sounds good and – more importantly – feels good. They succeeded in their attempts that is for sure, having created a game filled with various multipliers going up to 100x, a free spins feature which can reward you with unlimited number of spins in group of tens. The sixth reel in this great-looking game consists of multipliers that will be applied to every win you claim on the reels, also going up to 100x.

PLAY QUEEN OF GOLD FOR FREE (NO DOWNLOAD & NO DEPOSIT NEEDED!)

Play Queen of Gold Slot game for free, right here on our website (No Download Necessary & No Deposit Needed). Increase or decrease your bet and change the number of lines. When you’re ready, hit the “Spin Button”. Enjoy!

An Egyptian theme would not be complete without Cleopatra, the Empress of the Nile, which invites you to join her in an epic journey to ancient Egypt in a high-quality design and a beautiful 3D feel.

Pragmatic Play are well aware that slot game industry is full of Egyptian titles which is why they made sure to put a special twist on their latest game, which is such a pleasure to play. Pyramids and boats going by in the distance makes for the perfect setting of this great game. Symbols on the reels are also true to the subject with Bastet, Horus, Anubis and Queen Cleopatra, as the most rewarding symbol. The game also includes specially designed classic playing card symbols.

Below the reels, in a visual manner so characteristic of Pragmatic Play’s title, game controls are discretely situated below the reels. There are the minus and plus buttons on each side of the spin gauge, and with them you can select the coin vale to play with. The game starts with R0.1 which quite affordable even with 10 coins per single line. The coin value goes up to R5, which means you need R125 to play at maximum cost and maximum number of coins.

Landing a win is possible once you notch at least three matching symbols on a single payline, starting from the leftmost to the right. The sixth reel is active on every single spin, rewarding you with initial multipliers ranging from 2x to 10x on the first level. Multipliers go higher up as you go through different levels of the game.

Tutankhamun’s burial mask is the game’s wild. It might come as a surprise to learn Wild does not pay itself, but it will still replace for all the other symbols except for the Scatter. The Scatter symbol is represented as a pyramid, which is responsible for the Free Spins feature.

Before we go further on with bonus feature, let us detail more on those levels we spoke about earlier. At the beginning of the game you have an option to manually place a circled position at reel three to wherever you like. In order to go up a level, players will need to collect five Cleopatra symbols in a circled position during 25 spins or simply to land a Joker symbol on the multiplier – sixth – reel.

There are total of 6 different levels to go through in this game. The highest level brings the multiplier to 100x which is more than enough to land some whopping prizes.

Three Scatters reward you with 100 free spins during which the triggering multiplier from base game will be in play. This feature comes with no limits and there is absolutely no telling how many free spins you can actually get.

Queen of Gold slot might sound difficult knowing there are multiple levels to go through and circled positions to fill before you are allowed to move up the ladder, but this is actually a fantastically engaging slot which will keep you occupied throughout. Five normal reels joined by a multiplier reel promises great fun and even greater wins, while multipliers up to 100x and unlimited number of free spins are much more than you would have hoped for. Pragmatic Play deserve plenty of praise for all the great work they have done with this 2017 slot title. Queen of Gold is a combination of classy vintage design, presented in high-quality graphics and innovative gameplay which promises to guide players through this slot with constant excitement. Our rating: 95/100