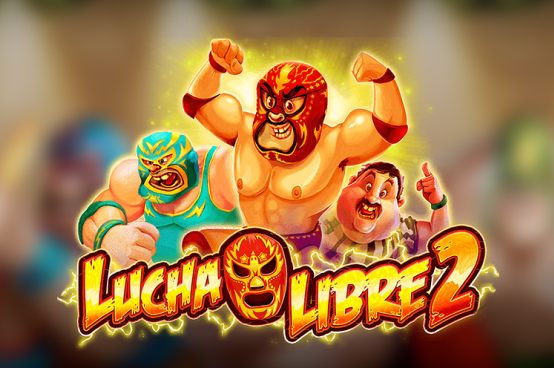 We have already met Mexican professional wrestlers in the RTG 2015 release Lucha Libre and now we can enjoy its sequel promising even more fun. Released in April 2018, Lucha Libre 2 is an online video slot played at 5 reels and 30 paylines with all the symbols appearing on the reels related to the theme of the game. The Mexican fiery spirit is everywhere on the reels, from green peppers to hot sauce and tequila shots, but you will also meet the referee, spectators of the show and wrestlers themselves. The visuals come in vibrant colours with cartoonish animations while an upbeat melody adds to the overall atmosphere of the game awarding up to 50,000 coins in a single spin. Grouped Wilds, multipliers, free spins and respins will enhance your chances of winning big!

Lucha Libre 2 is played on a standard 5×3 layout with 30 variable paylines. Try to keep them all active and adjust the stake to your bankroll by selecting a line bet. Push the Spin button to set the reels in motion or activate up to 1,000 automatic spins that will turn the reels for you. The reels are set against the wrestling ring and you will see the ropes behind the main screen. Land at least 3 matching symbols on an active paying line in a row starting from the leftmost position to get paid. Wild is depicted as the wrestlers and it shows up only on the middle reel to complete your winning combinations by substituting for all regular symbols.

There’s a lot going on in Lucha Libre 2, so you can expect Wrestler Wilds award a 2x, 3x or even 10x multiplier when appears in a stack on the reel 3 and complete your winning combinations. What’s more, Wilds can jump to neighbouring reels to complete even more winning combos at once. Another special symbol is Mucho Mayhem Scatter that activates the Time for Rumble feature in which Taco Malo will take on Nacho Friend in a duel. You have to choose moves to defeat the opponent and depending on your choice, you will get free spins and multipliers. During the feature, another special symbol is introduced. It is Fist Scatter that lands exclusively on the reels 1 and 2. When Fist Scatters hit these reels and Wild occupies the central reel entirely, the Fist of Fury feature is unlocked and you will benefit from respins with up to 4 reels featuring Fist Scatters held in their positions. A free game multiplier will be applied to payouts from respins at random.

Although this RTG 2018 title does not offer a progressive jackpot, its lucrative bonus features can give a boost to your bankroll on every single spin. The more you play the game, the more you will enjoy it with fearsome wrestlers fighting for the top prize of 50,000 coins. Whether you play Lucha Libre 2 on your desktop or mobile device, you can rest assured that you will enjoy every second of it with stacked Wilds, multipliers, free spins and respins helping you win big. Our rating: 85/100