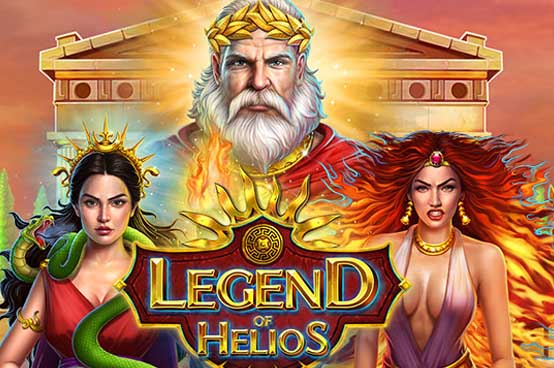 Unleash the powers of the gods on the reels of this intriguing and potentially high-paying, bonus-rich new slots game by the iconic software vendor, Realtime Gaming.

In Greek mythology Helios is the Sun God drives his chariot daily from east to west across the skies. RTG pays homage to this powerful god in its new title that went live at partner casinos in September 2021.

Games themed on ancient civilizations are nothing new in the world of online gambling, and you’ll find multiple games that revolve around ancient Greece, Rome, Egypt and Scandinavia. Yet these games remain extremely popular among players; which is why software providers continue to release them to their online casinos.

RTG has created a simple-to-play slot with a clear Greek theme, magnificent graphics and a matching soundtrack to get you into the mood of the game.

The game is played on five reels which feature bright, dramatic symbols that pay well if you land the right combinations. Even the card numbers on the reels are presented in vivid, eye-catching colors.

But it’s not enough that Legend of Helios slot just looks great. Realtime Gaming doesn’t disappoint in the winning department either, and presents players with ample opportunities to line up superb wins.

The gods will surely smile down on you if you land wild symbols, scatter symbols or bonus triggers. You’re looking at free spins, mystery stacked symbols, re-spins and multipliers. There’s an exciting Bonus Wheel Feature which is always a winner in online slot games.

Play your cards right, so to speak, and you’re looking at a top jackpot of up to 2,500 x your wager.

RTG has made sure that the new Legends of Helios can be played in all versions, including on practically every mobile device. Play the new game for free or for real money at Realtime Gaming-powered online casinos from today.

Play Legend of Helios For Free (No Download & No Deposit Needed)

It’s not a new phenomenon that software providers create versions of their new games that can be played for fun. One reason for this is to increase the exposure of the game. Online slots gaming is a cutthroat industry, with hundreds of new games being released every year. It stands to reason that providers want to maximize the popularity of their new titles and therefore offer them in demo mode so that they can be played by a wide range of players.

If you’re given the opportunity there is no reason to say no to free online slots! In fact, there are ample multiple reasons why you should say yes.

If you’re a regular player of slots, you may be wary of spending real money on every new title that hits the market. And if you think about it, why should you pay money to test-drive a new title, only to find that it’s not to your taste for whatever reason?

By playing Legends of Helios slot for free with dummy-money and free credits, you’ll be able to discover the game’s unique features, bonus dynamics, paytable and symbols before you wager for real money.

This game in particular has quite a simple format, but there are many online slots that are more complex, and it seems a good idea to find your way around it and discover the risk factors without risking your own bankroll.

Playing for free is also the best solution if you don’t intend gambling for real money, and just feel like enjoying a new Ancient Greek

You could read reviews about newly released slots, such as the one you’re reading about Legend of Helios slot right now, in order to get a better understanding of what the game is all about, but nothing quite beats spinning the reels and trying it out on your own, so that you can make up your own mind.

We’re offering you the opportunity to play Legend of Helios for free right here in demo mode. This saves you the need to log into an RTG online casino and open an account, or to make a deposit. Simply visit our site, click on the game in demo mode and start spinning the reels with free credits. There is probably no simpler or safer way to play Legend of Helios slot for free and with no deposit required.

How to Play Legend of Helios Slot

Legend of Helios slot can be played for real money or in demo mode.

If you choose to play in demo mode, simply choose the demo version and practice with free credits.

To play Legend of Helios for real money do the following:

No surprises about which symbol acts as the wild symbol. When the Wild Sun appears on the reels, it substitutes symbols adjacent to it to form winning combinations.

The only symbol that the wild symbol does not stand in for is the scatter. In this case, there are two scatter symbols – Patina Coin 1 and Patina Coin 2.

Patina Coin 1 only appears on the second and third reels, while Patina Coin 2 appears only on the fourth reel.

If you land three scatter symbols on the second, third and fourth reels, you’ll trigger the bonus portal.

Landing a scatter on reel 4 rewards with you up three Wheel Spins.

Realtime Gaming has added a great touch to Legend of Helios with a Mystery Stacked feature. Throughout the game, at random times, mystery stacked symbols morph into other symbols anywhere on the reels. You’ll be paid out the winnings after the mystery symbols are revealed.

If you stack matching mystery symbols on the second and third reels during the base game, you’ll trigger the Re-spin with Locking Mystery Stacks feature. The game reveals the mystery stacked symbols and locks them in place on the first and second reels. You’ll then spin and re-spin until you get a payout.

The Bonus Wheel feature is undoubtedly the pinnacle of Legend of Helios slot and it’s where most of the big wins take place. You can trigger this feature by landing two scatters on the second, third and fourth reels. When the scatter lands on the fourth reel, it reveals how many spins of the Bonus Wheel you have been awarded – 1, 2, or 3.

There are a number of possible wins that you can land by spinning the Legends of Helios Bonus Wheel.

There are 12 potential prizes up for grabs on the Wheel, including:

The maximum payout for spinning the Bonus Wheel is 2,250 x your bet amount. Of course, you can also win smaller amounts throughout the game by lining up the right symbols on the reels or playing the other bonus features such as the Mystery Stacked Symbols.

Before you roll eyes up at yet another Ancient Greece-themed online slot, we suggest that you take a good look at RTG’s latest release. Legend of Helios is a great game to look at, without being too overly complicated. It has an appealing interface and a pleasant soundtrack.

But the real appeal of this game lies in its bonus features, and we’re talking beyond the regular wilds, scatters and free spins. The Bonus Wheel is where the true excitement lies, with the chance to win one of 12 amazingly generous prizes when you spin the reels. It’s worth spending real money on Legend of Helios just for the chance of spinning the Bonus Wheel.

This is a medium volatility game with an average 96% RTP, suitable to all players and all bankroll sizes.