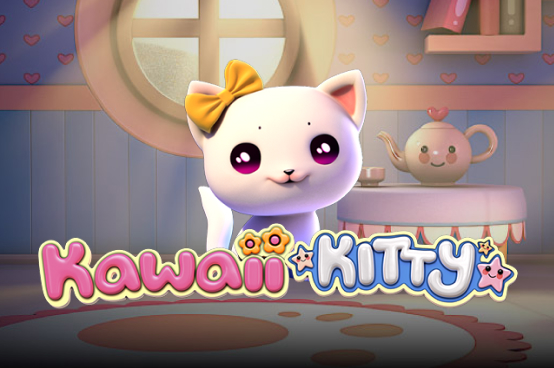 Cat lovers, get ready. Kawaii Kitty is a perfect choice for all the feline lovers out there, who will be given a chance to enjoy in a visually stunning slot presentation featuring a lovely Kawaii Kitty and the host of cat-related symbols. Betsoft have put in a lot of effort to make a unique and quite innovative game which not only looks good but also comes with a rather exciting gameplay. Built to play both ways, the Kawaii Kitty slot game offers a Wild Yarn Balls special feature that is the centrepiece of this great animated title.

Play Kawaii Kitty Slot game for free, right here on our website (No Download Necessary & No Deposit Needed). Increase or decrease your bet and change the number of lines. When you’re ready, hit the “Spin Button”. Enjoy!

Some would argue Kawaii Kitty is a girls’ slot, but we encourage you all to explore your feminine side with this 3D title that offers impressively soothing graphics and a relaxing soundtrack.

Set inside a girl’s room, obviously belonging to a rather spoiled Kawaii Kitty, five reels of this slot are filled with cat-related items that include a mouse, a hairbrush, a tuna can, a carton of milk, some fish, a bowl of cat food and balls of yarn which are the game’s wild.

Below the reels you will find all of the game controls where you can set your own playing preferences before hitting the spin button. Kawaii Kitty is playable from R0.2 to R10 and is played through ten bet levels.

Three matching symbols are required inside a payline in order to claim a win, but here is the first twist with this slot as it will reward you for combinations made both from left to right and right to left. Given the fact this wonderfully amusing game pays simultaneously, it will double the pay on a payline whenever you land five of a kind.

The base game of the Kawaii Kitty slot comes with a lovely spin Betsoft really love incorporating into their games. It is called Double Up, which is a classic gamble feature. Once you land a winning combination simply tap on the button and gamble all of your winnings or 50% of it in a Heads or Tail guessing game.

The biggest attraction in the Kawaii Kitty slot however is the Wild Yarn Balls.

The yarn is the game’s wild responsible for this exciting feature which comes in bursting graphics. Once you land a wild, the yarn balls will jump out of their sockets and start weaving the yarn through the entire reel.

After any potential wins on a wild spin are calculated, the game will reward you with a re-spin while the wild reel remains locked. Wild Yarn occurs on reels 2, 3 and 4 only, which ideally means you can land three consecutive re-spins if you get extremely lucky.

It is worth noting that the Double Up feature is available after the Wild Yarn Balls wins, which gives you an additional chance of landing some whopping prizes.

Betsoft should be praised for all the great work they did with Kawaii Kitty. What we got from this renowned slot developer is a finished product in terms of visuals, a truly sensational graphical presentation with 3D effects and cutting-edge appearance as far as quality is concerned. On the other side, the only issue we might have with this game is the fact it is aimed towards a selected audience of female feline lovers and we are afraid it would exclude masculine specimen and dog persons. Additionally, aside from the both-way paying feature and a Wild Yarn Balls & Re-Spin option the game should have included a couple of more incentives, free spins or a couple of multipliers in example. Our rating: 88/100