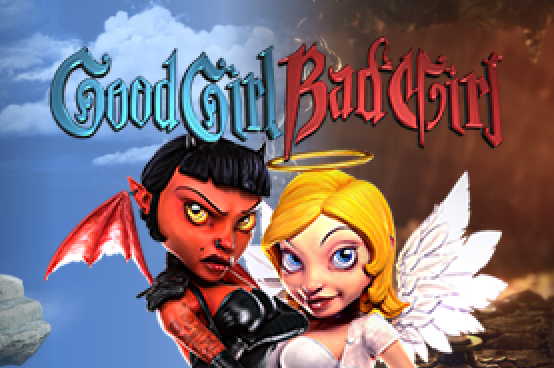 Good Girl, Bad Girl from Betsoft is a classic battle between good and evil, an angel and a devil in purgatory as an ultimate test for your character and soul. Betsoft released this 5-reel and 15-payline title back in 2014, with desktop and mobile variants following each other in quick succession. Good Girl, Bad Girl features a split-screen and selectable gameplay which allows you to choose which girl you’re going to back on your spins. In addition to some rather engaging special features, Good Girl, Bad Girl houses a two-fold progressive jackpot.

Play Good Girl, Bad Girl Slot game for free, right here on our website (No Download Necessary & No Deposit Needed). Increase or decrease your bet and change the number of lines. When you’re ready, hit the “Spin Button”. Enjoy!

With reel grid set in a place between Heaven and Hell where players gets to choose their path, Good Girl, Bad Girl will initially prompt you into choosing the gameplay mode – good, bad and combo.

The selection determines the way game pays so it is important to choose wisely. The Good mode will have wins paying from left to right, whereas the Bad mode will see winning combinations paying from right to left. The combo mode will require 2x the coins per line, but it will have the game paying both ways, setting the volatility somewhere on the middle of the spectre.

Upon selection of the game mode, make sure to select the number of paylines, wagers and coin value. Ranging from R0.2 up to R1, the Good Girl, Bad Girl from Betsoft can be everybody’s choice, although we suspected it will have an audience limited to mainly female players.

Every win in the base game comes with a Double Up feature, which will help you top up your initial win if you choose whether a coin toss will result in a Good or a Bad side.

The Good Girl, Bad Girl is packed with several highly intensive features which come as a bonus treat to the engaging and interactive base game.

Symbols on the reels include Good Girl and Bad Girl, their respective cats and classic playing card symbols, which are low denominations. The game also feature the Pitchfork and Halo, which are two special Wild symbols. Pitchfork can occur on reels 3, 4 and 5 and can work as a 1 to 4x multiplier. As for the Halo symbol, it lands on reels 1, 2 and 3 and can act as a 2x multiplier.

The two symbols are responsible for the activation of the Click Me Feature which happens once you land both Halo and Pitchfork symbols next to each other. Click Me mode depends on the mode you selected and will present you with a Good variant and a Bad variant.

Good variant pops up 4 white gift boxes inside which is a small win, medium win and a big win, together with the Collect box. Some of the boxes will be glowing to indicate the small and medium wins, while the non-glowing boxes is where you get to pick big wins or Collect prize to end the feature.

As for the Bad variant, it comes with four black boxes with red ribbon. The same applies here as well with an exception that glowing boxes contain either the big win or the collect prize.

Good Girl, Bad Girl also houses a Money Wheel Feature, activated by landing three bonus wheel symbols on reels 1, 3 and 5. The feature once again depends on the mode and the type of the gameplay, but in either case the bonus will have you spinning the wheel for instant credits, free spins and the ability to trigger the progressive jackpot.

Betsoft have gone over and beyond to come up with a highly engaging video slot which will have ushered the new era in the slot industry. Given the fact it is a 2014 title, Good Girl, Bad Girl slot was one of the first games to come with a fully cinematic experience which has thus far only visible in classic PC video games. Two modes – Good, Bad – or a combination of the two for the most indecisive players will take you through an engaging both-way paying system and some impressively rewarding features. And to round it all off, Betsoft have incorporated a two-fold progressive jackpot which only comes once during a single play. But that’s all you need actually. Our rating: 93/100