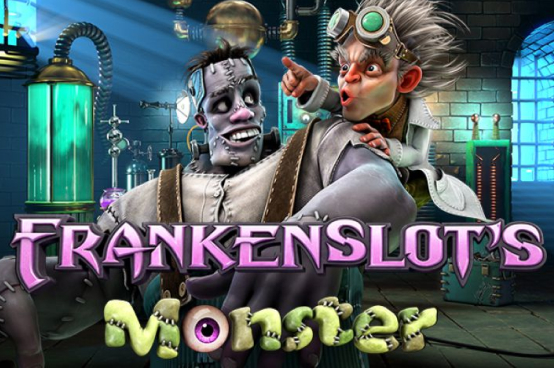 You all know the story of a genius scientist Frankenstein and his creepy creation which has become one of the most significant symbols of popular culture. Having been featured in all spheres of the entertainment business, Frankenstein has now received its slot version called Frankenslot’s Monster. Betsoft has really stepped up to the challenge and come up with a visually stunning and action-packed horror slot which is not as scary as you might have initially thought. Featuring 5 reels and 20 paylines, this slot game comes with two highly engaging bonus rounds and some potentially whopping winnings.

Play Frankenslot’s Monster Slot game for free, right here on our website (No Download Necessary & No Deposit Needed). Increase or decrease your bet and change the number of lines. When you’re ready, hit the “Spin Button”. Enjoy!

Frankenslot’s Monster comes with a multitude of colour on the playing screen and an exciting setting inside what would appear to be an underground make-shift laboratory.

Symbols on the reels include low-paying classic playing card symbols from 10 to A, while there is a selection of other symbols such as an eye in a jar, full moon or an electric shocker. Of course, doctor Frankenstein and his monster are also on the reels, together with the Wild logo which brings the biggest 1,000-coin prize.

The game pays for combinations of at least three matching symbols inside an active payline. You need to line symbols from left to right in order to claim a win. Frankenslot’s Monster comes with a nice little twist called Double Up. This feature has become the Betsoft’s trademark feature as it comes with almost all of their games.

Each time you land a win, the Double Up feature allows you to double the money by playing a simple Heads or Tails game on a Frankenslot’s golden coin toss. You can choose to gamble all your winnings or split them in half and risk only 50% of your prize.

In addition to all the regular symbols on the reels, this game comes with two special symbols. Scatter logo is the one you need to look for as three of those will reward you with 8 free spins.

On every free spin, one to three randomly selected symbols will be turned Wild which enhances your winning possibility. Best thing about this feature is that it can be retriggered anytime by landing another three scatters.

There is also a Bonus symbol in the game which introduces a ‘shocking’ in-game feature once you manage to land these three scattered Bonus symbols on reels 1, 3 and 5. The game will present you with a settings panel where you will determine the shock intensity to hit the monster with. Once you set the desired level, just sit back and enjoy the sparks fly around.

This Shock Bonus feature can treat you with a cash prize worth up to 25x your total bet so there is a good reason to shock that monster however sorry you may feel for him. Talking about the bet, the Frankenslot’s Monster comes with coin size of R0.2 up to R10 and is played across five bets per line which takes the total amount of your possible bet up to R1,000.

Frankenslot’s Monster from Betsoft is a stunning slot title which comes with 3D video graphics and animated screenplay which, with every spin you take, includes Viktor Frankenslot and his monster. Help the creepy doctor bring his monster to live with electricity shocks and earn money while you do it. In addition to looking great and being an aesthetical jewel, this 5-reel and 20-payline game is an action-packed game. You can hope to be rewarded with Free Spins and with an exciting Bonus feature where you will send sparkles of electricity inside the Frankenslot’s laboratory hoping to earn enticing prizes along the way. Once you try this game you will play it for hours. Yes, it is that good. Our rating: 94/100