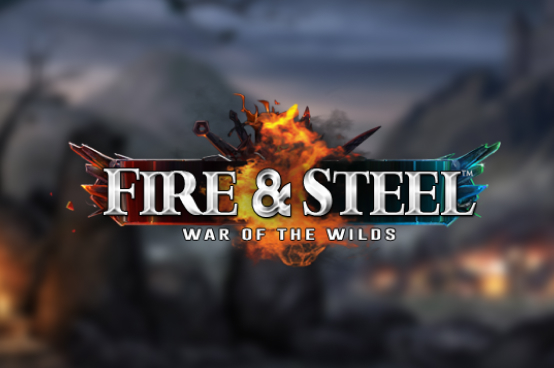 With its slot release from July 2017 Betsoft takes you to the land of Fire & Steel, which is the exact title of the online video slot played at 5 reels and 20 fixed paying lines. There are a few features which make the Fire & Steel slot stand out from the crowd. Not only that it features a diamond-shaped reel setup, but it also pays both ways. Needless to say, just like other titles from the developer, this one boasts exquisite 3D graphics and realistic animations providing you with an engaging gaming experience. The two protagonists of the story behind it are intrepid warriors standing for Wilds. They clash when appearing on the reels at the same time, so it’s no wonder that the tagline of the game is War of the Wilds. Throughout the game you can benefit from 10 retriggerable free spins and win a 500 coin jackpot.

Play the Betsoft Fire & Steel slot game for free, right here on our website (No Download Necessary & No Deposit Needed). Increase or decrease your bet and change the number of lines. When you’re ready, hit the “Spin Button”. Enjoy!

Fire & Steel is a slot played at 5 reels, a 3-4-5-4-3 row set and 20 fixed paying lines. You can wager up to 5 coins per line at the coin denomination ranging between R0.20 and R10. Once you choose your bet between R4 and R1,000, push the Spin button and set the reels in motion. If you push the Max Bet button, you will spin the reels at the maximum number of coins and a chosen coin size. If you like, you can activate automatic spins instead spinning the reels manually and enjoy the smooth gameplay. The slot is a home to 12 regular symbols and all of them pay when you land at least three of a kind along a paying line in succession starting from the leftmost or the rightmost position. The top paying regular symbols include the crown and two shields, the medium paying symbols are depicted as the book, the chalice, the helmet and the knife while low payouts are delivered by gems in various colours.

The most lucrative symbols are portrayed as Swordsman and Shieldmaiden representing Wilds. They are at the same time the top paying symbols. Whenever he appears on the reels, Swordsman releases a magical vertical beam above or below him and turns the symbols on the path into Wilds. Shieldmaiden turns regular symbols on her left and right side horizontally into Wilds. Wilds substitute for all other symbols including other Wilds. If beams intersect, you will be awarded 10 free spins. The symbol in the position where the beams have met is held at its place during the feature which can be retriggered.

The Fire & Steel slot will take you to an epic adventure where you can be a spectator of the battle between two truly Wild Warriors. Get ready to hear their Ancestral cries while releasing blazing beams thus helping you create more winning combinations and score bigger wins. The game is available on both desktop and mobile devices providing you with the same quality of a gaming experience thanks to the HTML5 technology it is developed in. If you want to add more excitement to the gameplay, the Double Up feature is available letting you gamble your winnings. Our rating: 89/100