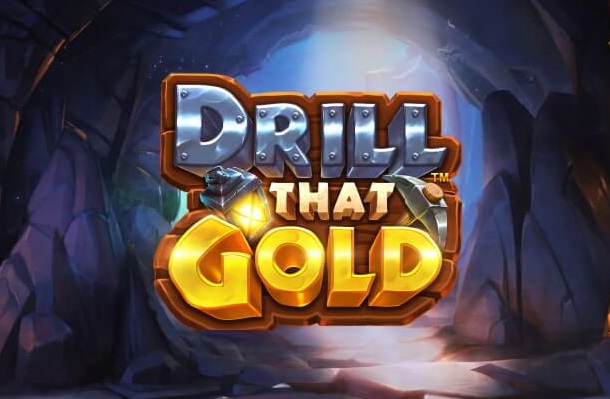 Drill That Gold Theme and Symbols

Drill That Gold is all about gold mining and going deep down to hunt for the yellow metal. Regular symbols on the 5 reels and 3 rows contain a gold miner, who presides over the proceedings, pickaxes, a gold car, crystals, lanterns, and the high playing cards.

The game is named after the great mining drill, which dominates the visuals with sophisticated animations. The game creates a realistic gold mining atmosphere. The drill, supported by a mechanical grid, is also used to spin the reels at the top of the reels. The reels are framed by wooden poles, as you would expect a mine structure to look.

The drill appears as golden and silver stacked wilds of miners. Explosions are used to good effect on the reels whenever a big win occurs. The game starts with a gold car travelling up a mine shaft dotted with gold coins. The helmet-clad, pipe-guzzling miner holds sway in the foreground always ready to fuse wires to trigger bonus features.

Drill That Gold is aptly named; drills are near-omnipresent in the game; not only are a prominent visual feature, but dominate the extras of the game, like Drill Feature, Spin Modifiers, Gold Spins, and the Ante Bet. Here are brief explanations of these features:

The drill is the scatter of the game but turns into wilds in the bonus game. Whenever a stack of miners hit the reels, it becomes a silver drill wild and fills entire reels. This can happen on any reel. And when this happens you can get a cash prize of up to 100 times your bet.

Spin modifiers can come into action on any non-win spin. The dwarf is the modifier, which turns the spin into a winning one, which can award you 10 times your bet at the least. Alternatively, the modifier may manifest bonus symbols to trigger the Gold Spins bonus round.

The Gold Spins bonus round is triggered when 3, 4, or 5 when the miner scatters hit the reels at the same time. You correspondingly get 6, 8, and 10 free spins. The miner bobs up or down to fill the entire reel with a stack of miners and turns wild.

You can activate the ante bet feature yourself. Every bet you make has a corresponding ante bet figure; if you raise your stakes to that level, you always get the golden drill in the base game. The increased stake is 25% higher.

How to Play Drill That Gold

You play with ten pay symbols on the reels with 20 fixed paylines. Every symbol has a monetary value, which is awarded to you whenever you get 3-5 identical symbols on the reels. The card symbols pay 0.8 to 2 times for a line of 5. The miner is the most valuable symbol and pays €5, €10, and €25 for 3, 4, and 5 miners on a line.

The wild of the game is a blast pump and can substitute all symbols to help create winning combinations, just like a joker in a card game. The drill is the bonus symbol of Drill That Gold, but it transforms into wilds in the bonus game, which fills up entire reels.

Drill That Gold is a high volatility game. There are two default RTPs in the game When you are playing within the regular betting window between €0.20 to €100 per spin, the active RTP is 96.49%. Interestingly, this return to the player is higher than when you activate the Ante Bet feature. Your bet increases by 25% but the RTP drops marginally to 96.45%.

Play Drill That Gold in Demo Mode for Free

The demo mode is the ideal way to get acquainted with any new slot game. You get to explore the themed narrative, get to know the game rules, and how to play the game. You get a first-hand experience of the game and know how much the game pays out, all without having to risk your own money. Demo games provide entertainment for free.

Demo games are always free because they are intended to give you an introduction to the game without you having to spend money. Free demo games are a great marketing tool for studios and operators. It’s an ideal way to reach out to players and introduce them to the games. Demo games often convert non-players into paying punters.

There are ten regular symbols in Drill That Gold, along with 2 bonus symbols – the wild and the scatter. The wild symbols also pay out whenever they land in combinations of 3 to 5. All game symbols are attached to paylines.

You can see the cash values of individual symbols for combinations of 3 to 5 on the paytable. Card games are low-value symbols; miners, crystals, pickaxes and gold cars are premium symbols, with higher values. The miner and wild are the highest-paying symbols. Both pay €5, €10, and €25 when they form a winning combo of 3, 4, and 5 respectively.

When you simultaneously land 3 to 5 identical symbols on a single spin, you are awarded the cash value of that payline. This is true of both the base game and the bonus rounds. Except that the bonus rounds are designed to offer more and higher wins; that is why they are called bonus rounds.

The maximum you can win in the Drill Feature is 100x. The corresponding value of the Gold Spins bonus game is 1,000 times your bet. The overall win potential of the game is 5,000 times your stake.

The volatility of Drill That Gold lies just below the North Pole. This means that you will not have many wins in the base game, but the bonus games can enrich you.

Why do South African players enjoy playing Drill That Gold?

Some of the reasons that South African players love this game are:

Drill That Gold is similar to Relax Gaming’s TNT Tumble, but fails to rise above Fire in the Hole xBomb by No Limit City. Fans of Gold Mining themes may also enjoy Mining Fever, Wild Diamond Miner, and More Gold Diggin’, etc. Games like Dead or Alive II, Hellcatraz, Vikings go to Hell, Agent of Hearts, and Cash Truck have features akin to Drill That Hole.