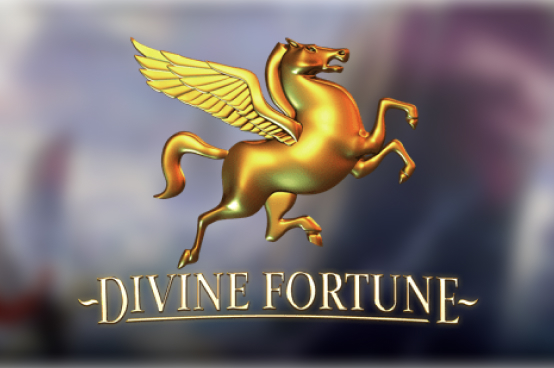 Divine Fortune is the 2016 slot release from one of the world’s leading software developers NetEnt. With a name synonymous with top-quality content, NetEnt remained true to their reputation with Divine Fortune – the 5-reel and 20-payline – video slot which features several engaging features built inside a quality-designed classical Greek mythology theme. In addition to being a visually enticing title, Divine Fortune offers plenty of action with its four different bonus features. Falling Wild Re-Spins, Free Spins, Wild on Wild and three-fold Progressive Jackpot offer plenty of reasons to be excited about this game.

Play Divine Fortune Slot game for free, right here on our website (No Download Necessary & No Deposit Needed). Increase or decrease your bet and change the number of lines. When you’re ready, hit the “Spin Button”. Enjoy!

Two classical architectural pieces of arts stand on each side of the reel grid in this 5×3 slot from NetEnt. Clean design, slick lines and bright colours make a perfect layout for the Divine Fortune slot which comes with just the symbols you would have expected to see from a Greek mythology presentation.

Medusa, Neman Lion, Minotaur and Phoenix as high-paying symbols in this game are joined by a selection of Greek-style playing cards, which are low denominations. The basic idea behind this game is to line up at least three matching symbols from left to right on one of 20 fixed paylines in order to gain a win. Five Medusa symbols notched up on a single payline is the top base-game prize worth 600 coins.

The entire visual layout of the game boasts a symmetrical feel around it with game controls nicely placed below the reels to maintain the classic feel. The game can be accessed at a coin value of R0.1 up to R5, whereas the game can be played through ten different levels.

Divine Fortune features a white horse – the Pegasus – as its main character. The Pegasus is the game’s Wild that replaces all other symbols in the game, except for the Free Spins and Bonus Scatter symbols.

The Pegasus plays an important role with the game’s special features which are 4 in total. First up is the Falling Wild Respins which comes to action once you land a Wild Pegasus on the reels. The Wild will shift down one position and reward you with a re-spin to significantly boost your winning chances. If more Wilds appear, additional re-spins will be rewarded.

Next up is the Wild on Wild feature which can be activated both during base game and through the Free Spins Feature. Once an overlay wild lands on top of a wild this feature will see the wild expand to cover the entire reel for new chance of a payout. The wilds also shift vertically to reward players with a respin.

Free Spins comes next, a feature that is launched once three or more Free Spins scatters land anywhere on the reels. You can hope to get between 5 and 12 complimentary rounds during this round.

And ultimately, there is a three-fold Jackpot feature which includes a Minor, Mega and Major progressive jackpot. It comes to play once you manage to land three or more bonus – gold coin – symbols. Bonus symbols will be randomly placed on the reels across 15 independent spinning reels which roll on their own. Each bonus symbol can land you a prize between 10 and 200 times your stake as you attempt to fill 1, 2 and/or 3 entire reels with Bonus symbols to claim the Minor, Major and Mega progressive jackpot, respectively.

NetEnt have certainly created an action-packed slot game in their Divine Fortune progressive slot. There is a lot going on here with four different bonus features, which include a three-levelled progressive jackpot bonus. The game comes with a decent enough base-game bonus worth 600 coins, whereas it is the Falling Wilds Respins, Wild on Wild and Free Spins that provide all the fun in the game. What we have before us is truly a visually stunning title and a medium variance slot game with many winning possibilities. Our rating: 93/100