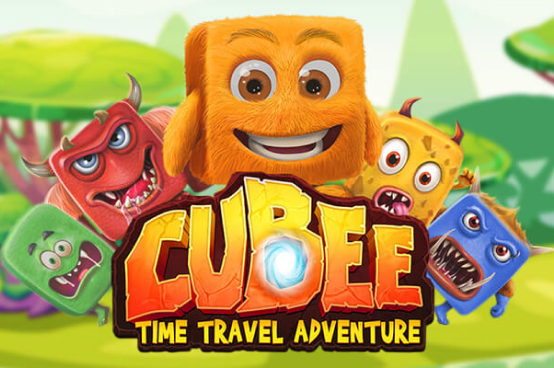 Realtime Gaming (RTG) is an online casino software provider. The company releases regular slots, with at least one, but often two new games each month. With regular quality games hitting our online and mobile casino screens, we are spoiled for choice. The newest game to join the RTG ranks is Cubee – Time Travel Adventure. Although released alongside the slots, the new game is more like a combination of a slot and an arcade game.

Cubee takes players on a journey through different eras, fighting the good fight, and ending up in his own land. Cubee is an orange cube covered with fur, a big smile, and big eyes. He takes us on a journey to a land that comes with free spins and multipliers.

The new casino game has crisp and clear images, with bright colors making it a fun and cheerful addition. Since there are no reels and no rows, the game is not really a slot game. There are similarities in that a number of symbols appear on the screen with new symbols appearing each round. The symbols come out of the spinning vortex, and settle on the screen eight at a time. In addition to payouts along the way, players store free spins and multipliers for use in Cubeeland.

RTG launched the new casino game on February 13, 2019. Check out our top RTG casinos, and give this new game a try. You can play the new game both in practice mode for free, and for real money bets.

PLAY CUBEE SLOT FOR FREE (NO DOWNLOAD & NO DEPOSIT NEEDED!)

Before playing Cubee – Time Travel Adventure for real money, you can test it out for free. RTG gives players the opportunity to try out new game releases for free with dummy credits. This way you can try out your wagering level, and see how much you enjoy the game. When you have seen how the game works, get ready to play for real money. Until that time, enjoy playing Cubee with no deposit needed.

If you have a casino account, and wish to try out the game for free, select the free practice mode. While you can continue to play in practice mode for some time, the casino may ask if you would like to switch to real money games. Although playing for free is great fun, remember that free mode winnings are just as fake as the dummy credits. For real money winnings, you need to switch to the regular real money mode. Once you are ready to do so, the changeover is easy.

HOW TO PLAY CUBEE SLOT

Cubee comes with special features which you earn along the way, and play later. The game is easy to play. Although it looks more complicated than slots, it isn’t. Get started by picking one of the RTG casinos on our list of casinos, and get started.

Once the game loads, choose your betting level with the + and – buttons seen on the game’s screen. Make a choice of between 1.00 and 20.00 per ‘spin’. Since the game does not have reels, there is no spinning involved. Click on ‘play,’ and the symbols will pop out through the center of the vortex. RTG notes that the biggest possible single payout can reach as much as 50,000x your total bet.

Take a trip through time with Cubee as he goes on a journey to his own land. In order to get there, he has to pass through three eras, each challenging on its own. Cubee has to beat Rocco, his main enemy to get through each stage. Once he defeats the enemy, and ends up in Cubeeland, you get to enjoy special features collected on the way.

Cubeean Rocco stand at the bottom of the screen. The cube-shaped furry guy stands on the left, and Rocco stands on the right. Symbols seen on the screen include Spike, Lucifer, Casper, and Bones, all of whom are Cubee’senemies. In addition to this, there are power balls, and weapons such as the cannons, axes, and bows and arrows. Power balls are wilds, and give Cubee energy. The weapons act like scatters, and help remove strength from Rocco and his cronies.

The stages of the game are as follows:
• Cubee starts in the Stone Age. When the axes appear, they hit Rocco on the head, slowly depleting his energy.
• Next up is the Pirate Age. During this era, cannons appear on the screen, triggering free games.
• Move on to the Viking Age. At this time, the bows and arrows come along, adding bonus multipliers to the game.
• Cubeeland is your final destination. This is the place where you get to make use of any free spins and multipliers accumulated during the game.

An important point to understand is that Cubee defeats enemies on the reels that are not as strong as him. As Cubee grows in power, he will be able to defeat more of the enemies that come out of the vortex.

Keep playing until you get past all three levels and arrive at Cubeeland. When you play your free spins with multipliers, you stand a bigger chance to win than in the other rounds. Your enemies do not have weapons in Cubeeland, which makes it easier for you and Cubee to rack up some wins.

Cubee may not be a run of the mill slot game, but this may be exactly what attracts players. You get a chance to play a game that mixes the good points of slots, like free spins, with a video game. The new game style is a breath of fresh air from RTG.

Although Cubee does not have a progressive jackpot, it is still worth playing. It is a medium to high variance casino game. You can play Cubee on both desktop computers and on mobile devices. This gives you the opportunity to play in the comfort of your own home or while on the go. Cubee is fun, and different to other casino games, making it well worth playing.