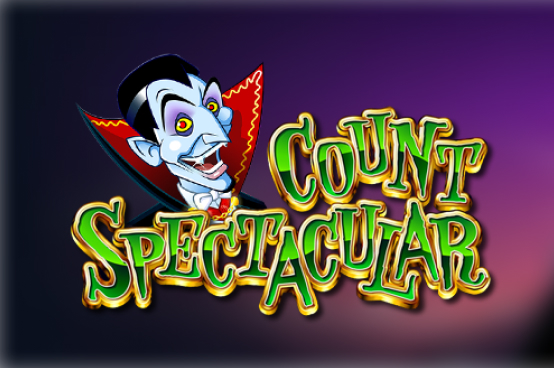 Count Spectacular is a 5-reel, 3-row and 25-payline slot game from Realtime Gaming produced in 2010, but still widely enjoyed by slot players around the globe, and for a good reason. This vampire-theme slot is not as intimidating as one would think, but it is its cartoon-looking style and apparel which add a positive edge and an element of surprise to it. More importantly, Count Spectacular offers incredibly engaging features which go from re-spins, free spins, expanding symbols and two types of Progressive Jackpots which can bring great rewards to the luckiest of players.

Play the RTG Count Spectacular slot game for free, right here on our website (No Download Necessary & No Deposit Needed). Increase or decrease your bet and change the number of lines. When you’re ready, hit the “Spin Button”. Enjoy!

Just as one would expect, a vampire-loving title such as Count Spectacular comes grimmer in colour and with reels set across a dark blue background, inside a gothic-inspired mansion. Symbols on the reels include a coffin, a big bad wolf, a bet, an eerie door knock, a carriage, some garlic and other vampire-suitable icons. Placed below the reels are game controls where you can select a number of paylines you wish to activate or adjust your bet size. Count Spectacular can be played at R0.01 bet per line, whereas the biggest stake you can make is R10 per line. In order to create a winning combination in this RTG’s title, you need to line up at least three of the matching symbols from left to right.

A game such as this would not be the same without a vampire. Fortunately, Count Spectacular is there with a big pointed-teeth smile of his to act as a Wild and help you enhance your winning chances. The Count will stand for all other symbols on the reels – except from the Scatter of course – while this Wild symbol will also expand to cover all positions on the reel when he becomes a part of the winning combination.Count Spectacular slot game benefits from a two-fold bonus feature activated by the Wild Count itself, who will trigger the Count Spectacular feature once it appears on both reels 1 and 5. This is where you will be presented with a choice between Free Games and Re-Spins sub-features.

The total of 12 Free Games are on offer for you, while the Re-Spin part of the bonus will hold the Wild triggering reels and re-spin the remaining reels 4 times, which adds to your winning potential significantly.

In the end, the game comes with two progressive jackpots which can be won at the end of any game whatsoever. These randomly-triggered jackpots will be added to your other wins in the game, topping the total tally and boosting your spoils of war.

Some possibly spectacular wins in this RTG’s slot game do plenty of justice to the Count Spectacular title. Graphically dynamic vampire-themed game is bound to excite you with an ever-popular theme and exciting features. Count Spectacular is a good choice for anyone’s pocket given the wide range of possible bets. The pair of fun-loving features add special spice to Count Spectacular slot game, whereas it is the two progressive jackpots – minor and major – that truly make it worthwhile. They can be won at random which by itself adds suspense and nail-biting uncertainty to your spins. Our rating: 78/100