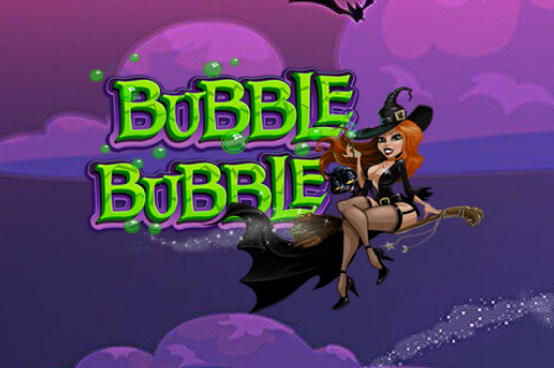 Named after a snipped from the famous quote first read in William Shakespeare’s Macbeth, Bubble Bubble is much more than ‘toil and trouble, fire burn and cauldron bubble’. This RTG’s slot game might be based on the spooky words, but Bubble Bubble and its 5-reels are filled with cartoon-like symbols and an attractive, good-looking witch as the game’s main character, which add a positive note to this bewitched game. Visually pleasing, Bubble Bubble hides proper treats within as it comes with no less than four different bonus features and possible top prize worth 3,000 coins. Surely enough of an enticement to put your fears of witches aside and join the magical party. .

Play the RTG Bubble Bubble slot game for free, right here on our website (No Download Necessary & No Deposit Needed). Increase or decrease your bet and change the number of lines. When you’re ready, hit the “Spin Button”. Enjoy!

Rested against the graveyard backdrop, Bubble Bubble reels will diminish the spooky effect by cartoon-looking symbols which put a positive spin on the game itself. They are everything you would expect from a bewitched slot game, starting from cats and pumpkins, magic potions, a jar of eyeballs and a skull. Imagined as a Halloween-themed game, Bubble Bubble also features a witch in suspenders. You heard it right. But we’ll talk more about her when the time comes.

Bubble Bubble is a game which pays from left to right and rewards you with winnings for at least of a pair of matching symbols. There are 50 paylines to benefit from and the number is fixed so you are always playing with the maximum number.

Bubble Bubble is a fast-paced slot game available at R0.1 to start with and up to R25. This medium volatility slot revolves around Winni the Witch Wild, who appears on reel three during base game and replaces all other symbols except for Cauldron Scatters. Winni is an expandable symbol, that covers entire reel and thus increases your winning chances significantly. The best thing about her is that she will triple your winning when a part of the winning combination.

Bubble Bubble comes with no less than four different bonus features. They are all triggered by Scatters with Great Ghosts feature offering 20 free spins plus an additional Wild symbol to benefit from.

Wild Witches feature will reward you with 9 free spins, but this bonus mode comes packed with Winni the Witch, who will bring about a huge multiplier in this round as part of the in-bonus bonus round called Win-Win feature. Win-Win grants a bonus when overall win inside the Wild Witch feature is 10x the triggering bet or lower. Win Win bonus goes up to 100x multiplier with a no win.

Ultimately, there is a Bewitched feature with 7 free spins on the table, but with Winni the Witch Wild stuck on the middle round throughout the bonus feature.

Graphically impeccable and as visually appealing as any other RTG’s title, Fucanglong truly is something different than what we got used to seeing from Realtime Gaming. Action-packed slot game with no less than 3 different bonus features which are interactively trying to help players achieve as bigger wins as possible is not to be missed. It comes with a Chinese theme and we know that a subject that exploited can be a major put-off, but it really is not the case with Fucanglong. Beautiful and engaging, this 5-reel slot with 1,024 ways to win is a full package. Our rating: 86/100