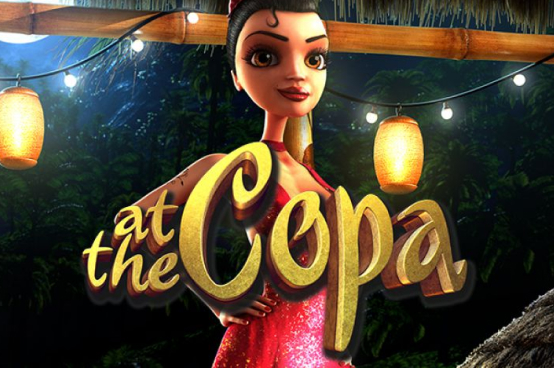 Play at The Copa Slot Summary

Put your dancing shoes on and step on the floor at a beach bar to compete with some of the best South American dancers you will have ever met. Rico and Pedro, the two competing salsa dancers with vie for the affection of beautiful Carolina and it is up to you to decide who gets to claim the coveted spot beside her on the dance floor through this wonderfully engaging 5-reel and 30-payline slot game. Betsoft have done an amazing job with the graphical aspect of the game, whereas the gameplay is equally – if not more – impressive. You will be struck by two exciting features – Dance Bonus Round, Free Spins – whereas the red hot chilli pepper progressive jackpot is here to blow your mind. You could claim up to whopping 430,000 credits in this 3D game which takes you through some amazing cinematic experiences.

PLAY AT THE COPA SLOT FOR FREE (NO DOWNLOAD & NO DEPOSIT NEEDED!)

Play At the Copa Slot game for free, right here on our website (No Download Necessary & No Deposit Needed). Increase or decrease your bet and change the number of lines. When you’re ready, hit the “Spin Button”. Enjoy!

It is really clever from Betsoft to create a reel-grid as part of a bamboo wall in a beach dance bar and place the beautiful Carolina in front of the playing screen. She does not mean to distract you, only to set the tone for this dance-loving title.

Below the reels are the 3D game settings where you can select the coin value, starting from R0.2 up to R5. You can also select the number of bets per line going from 1 to 5 making the game quite affordable for all different types of slot players.

Symbols on the reels include Carolina, Pedro and Rico as the top paying symbols, whereas a flamingo, and a set of different musical instrument complete the offering together with a cold alcohol drink.

The aim of the game is to notch three matching symbols on an active payline from left to right. The base game improves your chances of landing a win thanks to the Ocean Wild, which is a stacked symbol covering the entire centre reel. Once you land the Wild symbol, At the Copa will reward you with a free spin. A win on the free spin will result in yet another complimentary round with Wild becoming a 2x multiplier. This feature will go all the way until you do not receive a win or the Wild reached the 5x value.

Another great feature is the Double Up mode. A classic gamble feature, allowing you to double the initial win through a simple toss of the coin game.

At the Copa is filled with some rather impressive features first of which is the Free Spins Mode.

When you land 3 dance shoe symbols anywhere on reels 1, 3 and 5, the free spins will commence. It is not an ordinary feature as you get to choose a dancing partner for Carolina, which then becomes Wild and enhances your winning possibilities quite significantly. Free Spins offer pays between 2x and 10x per spin, randomly.

Another great feature is the Bonus Round which will be initiated once you land both male dancers on either side of the female dancer symbol on paylines 1, 2 and 3. The Bonus Feature comes with cinematographic experience and with some rather slick dance move that will leave you speechless.

And ultimately, At the Copa is a potential life-changer with its red hot chilli pepper progressive jackpot.

In order to trigger this feature you’ll need to land 5 chilli peppers on the reels while betting the maximum bet amount. Only the top bet will qualify you for this impressive feature which – depending on the position of the peppers – will present you with a different sized jackpot.

At the Copa truly is an action packed slot game coming from the creative kitchen of Betsoft. This 5-reel and 30-payline rhythmical title promotes the dancing art and really is an exciting game. Betsoft have made sure to make it look great with the cinematographic visual appearance and impressive soundtrack, whereas the gameplay itself is only a cherry on top. At the Copa features a wonderfully engaging Wild feature in the base game which comes with free spins and up to 5x multiplier. Special features include Free Spins and a Dancing Bonus Feature, whereas it is the three-way progressive jackpot that makes this game so popular. You will enjoy playing this game and fighting for potentially life-changing winnings while also having great time with fantastic music and impressive dance moves. Our rating: 94/100

Check out our best casino bonuses: