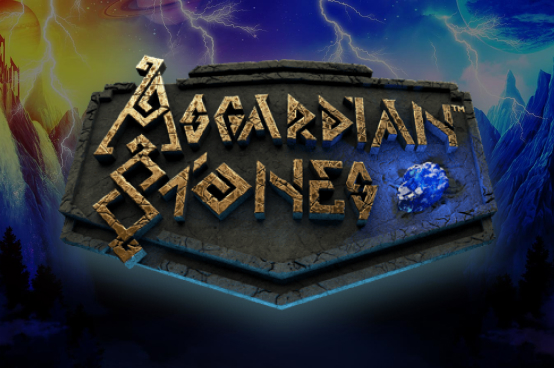 Welcome to Asgard, the home of Norse gods, where almighty Odin, Thor, Freya and other deities wait for you. Asgardian Stones is an online video slot launched by NetEnt in 2018 as one of their first releases of the year. Inspired by Norse mythology, the game features stunning visuals with symbols looking as if carved of stone and an epic soundtrack which will set you in the mood from the moment you load it. It uses 5 reels and 20 paylines and benefits from the Avalanche feature and Colossal Symbols occupying 2×2 or 3×3 positions on the reels and awarding up to 4x multipliers. While playing the game, you can win instant cash prizes, free spins and up to 200,000 coins.

Play Asgardian Stones Slot game for free, right here on our website (No Download Necessary & No Deposit Needed). Increase or decrease your bet and change the number of lines. When you’re ready, hit the “Spin Button”. Enjoy!

Since the game uses 20 fixed paylines, all you have to do before you start spinning the reels is to choose a bet level and a coin denomination. Your wager can be anywhere between R2 and R2,000 per spin, so pick a value that suits you best and you are good to go. The Max Bet feature is available and by pressing it, you will spin the reels at the maximum bet level once. If you don’t feel like pushing the Spin button all the time, you can opt for up to 1,000 automatic spins by using the Autoplay feature. The symbols that make up the higher ends of the paytable are depicted as Norse gods and goddesses while the rest of positions are covered by playing card symbols designed to look like runes. Land three or more matching symbols in a row starting from the leftmost position on a paying line to win a prize.

Whenever you create a winning combination, thanks to the Avalanche feature, the symbols included in it will explode and new ones will fall into their place. Thus, you can hit multiple wins within a single spin. On every spin, a 2×2 or a 3×3 Colossal Symbol can appear on the reels to cause a Colossal Crush. Huge symbols will crush some of the rows beneath them while awarding multipliers going up to 4x. Keep an eye on the multiplier meter on the left-hand side of the reels to see the value of a current multiplier. Another bonus feature is the Bonus Wheel triggered by the 3×3 Colossal Symbol which shows up only on the reels 3, 4 and 5. It can award a prize even when it appears partially. The prizes awarded by the Bonus Wheel include up to 300 coin instant wins and up to 15 free spins. The feature can be retriggered to award up to 25 extra free turns. Throughout the game you will benefit from Wilds which can show up on the reels during free games as a Colossal Symbol. When Wild is a part of a winning combo, it will split into regular Wild symbols that will explode to leave their place for new symbols to fall into. If Wild is not included in a winning combo, it will stay in its position until it forms a winning combination or the feature ends.

Norse mythology and gods may not be your cup of tea, but the NetEnt 2018 release will definitely provide you with a thrilling gaming experience thanks to the all bonus features included. We have to hand it to NetEnt for all the innovative bonus features as they make the game worth playing. With Lady Luck on your side, you will be able to hit wins frequently with rewarding extras boosting your chances of winning on every spin. Look out for the massive Bonus Wheel symbol to trigger free games during which you can win even bigger prizes. Our rating: 90/100