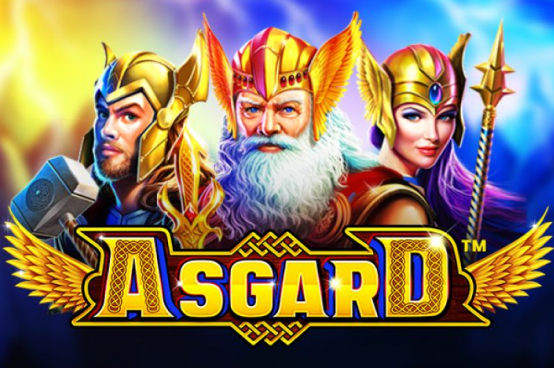 In December 2017, RTG takes you on an adventure to the Home of Norse gods Asgard with the online video slot of the same title. Get ready to meet the gods including Odin, believed to rule Valhalla, the hall of the dead in Asgard, along with Freya, Loki and Thor who will help you win some hefty payouts during this epic journey at 5 reels and 243 ways to win. High-quality graphics combined with smooth animations and a dramatic soundtrack will get you into the mood to spin the reels. You can be sure that there is a lot going on as the game comes packed with a progressive free spins feature getting more and more rewarding as you unlock its bonus games. With the top prize standing at 6,000 coins, the game offers free spins with Wild multipliers, morphing symbols, respins and additional substitutes added to the reels to boost your winning chances.

PLAY ASGARD SLOT FOR FREE (NO DOWNLOAD & NO DEPOSIT NEEDED!)

Play the RTG Asgard Slot game for free, right here on our website (No Download Necessary & No Deposit Needed). Increase or decrease your bet and change the number of lines. When you’re ready, hit the “Spin Button”. Enjoy!

Make sure to adjust your bet according to you budget. You can do it simply by pressing the up and down arrows on the Bet button. Other options included in the control panel are Speed and Autoplay and by using them you can speed up the reel’s speed and activate automatic spins so that you can enjoy the gameplay without spinning the reels manually. As the game offers 243 ways to win, you will win as long as you land identical symbols on adjacent reels starting from the leftmost position. The higher ends of the paytable are made up of the symbols portraying the Norse gods while the rest of positions are populated with playing card symbols designed to resemble runes.

The Asgard slot benefits from Golden Wilds that substitute for all regular symbols to complete your winning combinations. The Thunderbolt feature can be activated randomly during the base game to turn up to 5 reels Wild. The Bonus symbol or Scatter is the blue symbol that triggers the progressive free spins feature which offers even four bonus games. You will start with the Goddess feature triggered by 3 Scatters which awards 15 free games during which all prizes are tripled. After you have triggered the feature 5 times, the Loki’s Magic bonus game will be unlocked with 20 free games during which special Wilds are added to the central reel. From the 10th trigger on, you will be able to access the Thunder God feature awarding 25 free games with 2x or 3x Wild Multiplier appearing on the three middle reels. Multipliers can go up to 6x if Wild Multiplier overlays Golden Wild. Finally, the Valhalla feature is available from the 15th trigger on to provide you with 30 free spins featuring morphing symbols. During it, all winning symbols disappear and new symbols appear in their place to form another winning combo during respins with payouts subject to up to 5x multipliers.

If you are a fan of Norse mythology, make sure to give the Asgard online video slot from RTG a try. You can play it across all three platforms and enjoy its rewarding bonus features wherever you are. The more you play, the more rewarding bonus features you can get, so start spinning the reels at a bet that suits you best and the Norse gods will help you win big. With the free spins feature which combines bonus games from other games developed by the reputable developer earlier, Asgard will provide you with loads of entertainment and plenty of opportunities to win, which makes it a game worth your time and money. Our rating: 88/100