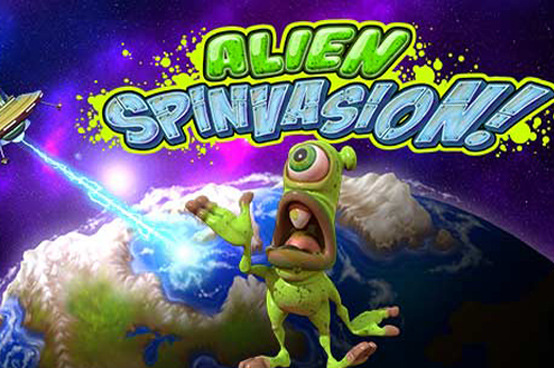 Alien Spinvasion is a five-reel slot with 50 adjustable paylines, brought to us by Rival Gaming in March 2017. Playable from R5 per spin, the 2017 release offers a couple of fun and rewarding features, like Sticky Wilds Re-spins and Free Spins. The reels of the Rival title are set in outer space, and it is up to you to help the Army General stop those oozy green creatures from another galaxy from invading our beloved planet Earth. Use the Alien Wilds to trigger re-spins, and wait for the Army General to appear on the reels to start the Free Spins feature. Alien Spinvasion houses crisp graphics and a matching soundtrack that mounts the tension up as you spin the reels.

PLAY ALIEN SPINVASION FOR FREE (NO DOWNLOAD & NO DEPOSIT NEEDED!)

Play Alien Spinvasion slot game for free, right here on our website (No Download Necessary & No Deposit Needed). Increase or decrease your bet and change the number of lines. When you’re ready, hit the “Spin Button”. Enjoy!

Since gamers will actually be settled in a cockpit of the space ship, there are several things they need to learn about the command list before they start their battle with aliens. The slot uses five reels and 50 adjustable paylines, meaning that players can use less paylines to reduce their costs, but that will also reduce their winning chances. The coin value goes from R0.1 to R2.5, and you can also set the number of coins you want to bet per payline (1-10). If you decide to play with all 50 paylines, the minimum you can bet is R5, while the maximum possible wager is set at R1,250. The 2017 release pays left to right, starting from the leftmost reel, and three of a kind is the minimum for landing payouts.

As for the symbols populating the reels, there’s the Space Ship, Earth, Telephone, Alien Egg, Laser Gun, Asteroid, UFO, and playing cards, functioning as low-paying symbols. Alien functions as a Sticky Wild that substitutes for all symbols except Army General, which is a Scatter. Earth is the most rewarding symbol in the game, since it offers 250 coins for five of a kind.

Every time you land an Alien Wild on the reels, it will trigger a free re-spin that comes with a rising multiplier. The Wild will remain locked on the position for the following re-spin. If another Wild is landed during the re-spin, you get an additional re-spin, while the multiplier rises. All Sticky Wilds will remain on the screen during all re-spins, and the multiplier can go up to 11x, but for that to happen, you will need at least 5 successive re-spins.

When the Army General decides to appear on the screen, he will immediately trigger the Free Spins feature and reward punters with 11 freebies. During the feature, all icons will become drop icons. It means that every time three or more matching symbols form a winning combination, they will activate the drop feature and disappear from the reels, while the symbols above them will fall down on their place and fill the cell to form new winning combinations. Basically, it is possible to form multiple winning combinations in a single free spin.

Alien Spinvasion is a visually impressive slot, which boasts crisp graphics and a fitting soundtrack. The wide betting range will definitely attract an even wider audience, including high rollers and penny punters. As for the special features, punters can really benefit from Sticky Wild Re-spins, which comes with an awesome multiplier that goes up to 11x, and also from the Free Spins feature, including drop icons feature. On the other hand, it will take you a while until you trigger the Free Spins feature, while triggering five or more successive re-spins to get the 11x multiplier is highly unlikely. All in all, the 2017 release is worth the try, but it will not chain you to your seats for hours, in our humble opinion. Our rating: 75/100