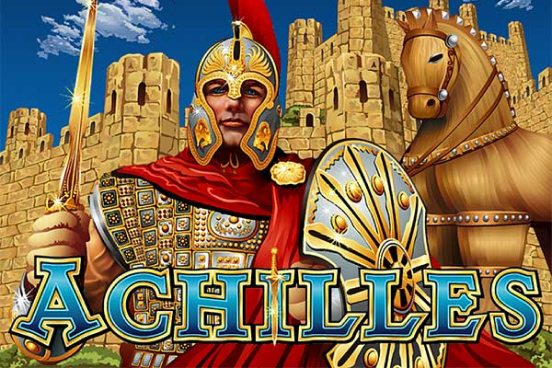 Based on the ancient Greek hero Achilles who fought in the Trojan War and was renowned for his strength as well as for his single weak spot, the RTG’s Achilles is a game with virtually no fragile tendons. This progressive video slot is a 5-reel engine with 20 adjustable paylines and a triple-folded bonus feature. You can enjoy two Free Spins features with a 3x multiplier to your wins in this visually simplistic game, but nevertheless beautiful and clean. Given the fact Achilles is a 2006 release we have no remarks on its visual presentation. We hardly have any negative remarks, while we’re at it.

PLAY ACHILLES SLOT FOR FREE (NO DOWNLOAD & NO DEPOSIT NEEDED!)

Play the Achilles slot game for free, right here on our website (No Download Necessary & No Deposit Needed). Increase or decrease your bet and change the number of lines. When you’re ready, hit the “Spin Button”. Enjoy!

The Achilles slot’s appearance is an expected one for a presentation depicting an ancient Greek world. The reel grid is situated on the banks of Troy apparently, overlooking an enclosed city to conquer.

RTG’s 2006 title portrays quite an appropriate group of symbols which include Helen of Troy, the Trojan Horse, a Shield and a Crest as the high-paying symbols. Classic-looking playing card sym-bols from 9 to A complete the symbol offering in this slot.

Game controls are discretely placed below the reels where you have a selection of buttons to choose from. There is a bet value adjustor with coin size ranging from R0.1 per line, up to R10, which takes your maximum stake up to R200 should you decide to select all 20 available paylines.

Once you set up the controls and adjust the game engine per your own liking, simply hit the spin button or set it to autoplay to sit back and watch all the action unfolds before you.

Achilles himself is the game’s Wild, which substitutes for all other symbols except for the City of Troy, which is the Scatter. Achilles is also the highest-paying symbol of them all worth whopping 10,000 coins. In addition to being a generous Wild symbol, Achilles will initiate a free spins bonus symbol with a number of free rounds depending on the number of activating wilds. The total of 15, 20 or 25 free games can be won with all Troy Scatters being changes to Achilles or Hellen. To top it all up, all prizes during this feature will be tripled.

The Troy Scatters, on the other side, will also reward you with another set of Free Games. Landing three or more Scatters anywhere on the grid will reward you with 10 free spins during which all wins will be doubled. This feature can be re-triggered meaning you can ideally land 20 free rounds.

Ultimately, the game benefits from a randomly-activated progressive jackpot which can be won at the end of any spin whatsoever and which really stands as the biggest incentive in this great game.

Slot gaming world has become a demanding place since technological advances have truly set the bar quite high over the past couple of years. Some of the older titles quickly go to oblivion as gamers forget they ever existed, but that is most certainly not the case with RTG’s Achilles. This 2006 slot title is an engaging and an action-packed game which offers plenty of chances for play-ers to land substantial wins. The total of three different types of Free Spins and a randomly trig-gered Progressive jackpot are more than enough reason for us to give the most positive verdict on this great game. Our rating: 91/100