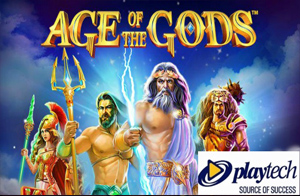 Exactly two years ago, Playtech successful partnership with Marvel came to an end, and the new owners of Marvel (Disney) decided not to renew the long-term agreement. This forced Playtech to remove all its highly successful Marvel brand games from its library, much to the disappointment of its players.

For Playtech, it wasn’t an option to leave the gap left open from the Marvel withdrawal unfilled. The group’s creative team set to work, and the idea of the Age of the Gods slots series was born. Playtech stuck to the same superhero theme, only this time bringing the titles a touch of Greek mythology.

Two years down the line, and Playtech is extremely happy with the feedback from its customer on the Age of the Gods series. South African players, in particular, are huge fans of the games and play them religiously at sites such as Casino.com and other SA-facing Playtech-powered sites.

The games have been described as the perfect balance between excitement and simplicity – ie. just the right amount of bonus features, without too much noise and flash that may put some players off.

Like any good business, however, Playtech hasn’t put all its eggs in one basket and continues to roll out games in its DC Comics series of slot games as well. Playtech continues to maintain its long-running partnership with Warner Bros. and bases many of its great games on DC Comics superheroes. Characters from popular movies such as Suicide Squad and Justice League appear on the reels of many Playtech titles, and they have a keen following of players as well.

However, Playtech’s Age of the Gods slots brand seems to have gathered an even bigger following, and players have been thrilled to see new titles (such as Mighty Midas and Medusa and Monsters) added in recent months. Playtech continues to dip deeply into the many different themes and tales in classic Greek mythology and it is exciting to think which new games they will come up with this year.

This entry was posted by on Monday, 18 February 2019 11:48 in blog Blog subscribe
Leave a reply
You are not allowed to leave a reply!