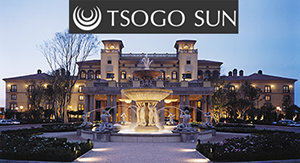 In an interview with Bloomberg, the chief executive officer of Tsogo Sun Holdings Ltd, Marcel von Aulock, said that the company was waiting for South Africa’s economy to improve so that it could move forward with future projects, while at the same time it continued to upgrade its existing casinos. More square meters and betting machines are to be added to casinos in the Tsogo Sun’s core market, with the new betting machines expected to bring in more revenue.

According to von Aulock, Tsogo Sun was “at the tail end of the transformation of the portfolio.”

“We’ve done all the work, so we are kind of waiting for the uptick to come,” he said.

The company’s profits are roughly divided between 65% from gambling and 35% from hotels and others.

The forecast for the South African economy is not very bright at present, with analysts expecting growth to be at its slowest since the recession 2009. Nevertheless, Tsogo Sun Holdings continues the slow but steady process of upgrading its large casino complexes such as Gold Reef City and Montecasino in Johannesburg. It is expected the Tsogo Sun will spend around R2 billion expanding the Durban-based Suncoast hotel and casino, as well as buying previously-leased properties to add them to its portfolio.

Due to this policy of expanding and upgrading, Tsogo Sun saw a 6% growth in gaming wins through March 2016. Revenue increased 9% from its hotels.

Looking beyond South Africa’s borders, Tsogo Sun’s CEO said that the company would not, for the time being, be expanding internationally, especially since it did not have the desire to deal with unfamiliar regulators and customers at this time. Tsogo Sun, said von Aulock, prefers to focus on the local market, of which it has a roughly 40% share.

Von Aulock said that the company simply did not see any reason to expand internationally right now. “Maybe one day when we completely run out of things to do in South Africa,” he said in the interview.

Another interesting piece of information shared by the CEO is that Tsogo Sun hopes to proceed with its idea of adding a new Cape Town casino. The plan is to move its current license from a smaller facility to a new, larger casino. It will probably take until the end of the year to see regulations change so that a relocation application process can begin.

This entry was posted by on Tuesday, 26 July 2016 00:00 in blog Blog subscribe
Leave a reply
You are not allowed to leave a reply!