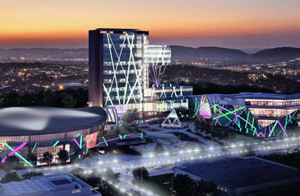 In a trading update issued by the South African casino and entertainment giant, Sun International, it was announced that the group’s newest casino, the Sun Time Square Casino in Menlyn, Pretoria is “trading behind expectations.”

Sun International did not specify how big a loss the casino incurred, but did say in the statement that “as a result of disappointing trading and a high interest charge, Sun Time Square has incurred a significant loss before tax.”

The Menlyn Casino owns a 13% share of the Gauteng gambling market, and between April 1st, 2017, when the casino first opened its doors, and to the end of the year, it had booked R827 million in revenues.

Sun International fought a bitter battle to have the casino built in Menlyn, and the journey was fraught with seemingly impossibly obstacles. These included demonstrations and objections by community groups, as well as court orders drawn up by its rivals, Peermont and Goldrush who fiercely objected to the project. In addition, Sun International needed to get permission from gambling authorities to have its existing Gauteng casino license transferred from the Morula Sun Casino to the new Sun Time Square.

Sun International also had to get the project built and running within a tight two year time period and admitted.

Just before the opening of the casino last year, the then-outgoing CEO Graeme Stephens told the press: “Nelson Mandela has been quoted as saying that ‘it always seems impossible until it’s done’, and there were times when this project seemed impossible.”

“I actually gave the go ahead to break ground before all the necessary approvals were through. It could have had some serious consequences for me had it gone wrong,” admitted Stephens.

Sun International promised that the R3 billion development would become one of Pretoria’s main attractions, and would serve as an important catalyst for local tourism.

The casino includes a five-star hotel, a casino and an arena that is larger than the Sun City Superbowl.

This entry was posted by on Monday, 12 March 2018 10:56 in blog Blog subscribe
Leave a reply
You are not allowed to leave a reply!