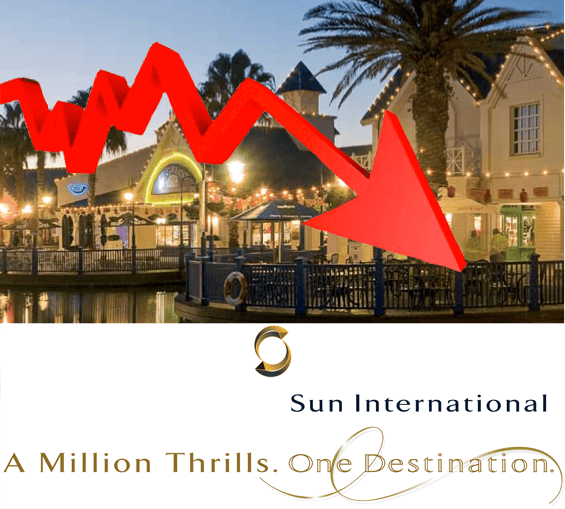 One of the biggest players in the South African gambling industry, Sun International has seen a significant drop in its share prices, with investors left feeling grim about numbers said to be the lowest in almost seven years. Sun International shares plummeted 9.3% to R63.05 on the Johannesburg Stock Exchange – the lowest it has been since March 2009. The company is now worth R7.2 billion.

Analysts, however, believe that the stock falls reflect the state of the general market, with gross domestic product rising 0.6% in the fourth quarter, compared to the 0.9% that it was expected to grow. South Africa’s economy only grew 1.3% in the whole of last year. The same analysts are confident that Sun International is strong enough to pull through this period.

South African casinos are actually quite resilient businesses and we are still seeing some growth on the top line for the industry, so that talks to the resilience of the business,”noted De Wet Schutte, an analyst for the Cape Town based Avior Capital Markets, adding, however that the market is taking a “fairly dim view on the valuations and the outlook.”

Schutte said that Sun International was “operating in a very difficult macro environment, but it’s also in restructuring mode. There are still a couple of deals that need to be concluded, so there’s still a lot going on for the group.”

The group said that growth of its Chile-based casino helped offset the poor numbers from the African market.

The chief executive of Sun International, Graeme Stephens said that the core South African operations of the group still contribute 80% of revenue and the prevailing conditions in the country resulted in “extremely low casino revenue growth” – well below the level of cost escalation.

Sun International’s revenue grew by 10.3%, however, to R5.85 billion, partly due to new properties that were opened during the period. Stephens said that the South African gambling group would also benefit from a weaker rand overall. The CE said that he expected the hotel side of the business to do well, considering the weak currency.

This entry was posted by on Monday, 07 March 2016 00:00 in blog Blog subscribe
Leave a reply
You are not allowed to leave a reply!