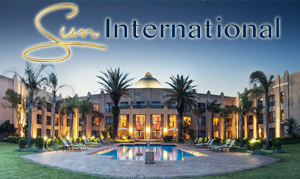 Recent numbers released by the South African casino and hotel group, Sun International, showed that the company’s total group revenue rose 19% to R7.6 billion. This amount reflected the six month period ending June 30th, 2017. The growth in group revenue was due to the fact that the results from Sun International’s Latin American facing Sun Dreams, as well as Sun Slots and the new Time Square casino complex in Pretoria were included in the report..

According to the unaudited interim results, group earnings before interest, tax, depreciation and amortization (also known as Ebitda) climbed from R1.6 billion to R1.9 billion – a rise of 15%.

Other details that emerged from Sun International’s report:

Revenue that was generated by South Africa’s casinos (not including Times Square in Pretoria, Morula Sun Casino and international business) dropped slightly by 1.9%.

The chief executive officer of Sun International, Anthony Leeming said in a media report that he was pleased with the results overall. He pointed to Sun International’s ‘back to basic’ policy, which has taken over from a growth and investment phase.

“We have a priority to be good at everything we do,” he said. “The weak South African economy means consumers are holding back on expenditure – even if they have money to spend.”

Leeming said that Sun International has done a lot in the last few years to refurbish and maintain its properties around the world. “A lot of drivers are about offering the right entertainment and service levels and treating VIPs well,” he said. “One has to make sure you can adapt and change where needed.”

“We are doing that,” he added.

“The gaming side is difficult and disappointing in that sense,” he said. “Other forms of gaming have, for instance, been introduced in South Africa over the last four to five years, impacting casino spend.”

This entry was posted by on Wednesday, 18 October 2017 08:12 in blog Blog subscribe
Leave a reply
You are not allowed to leave a reply!