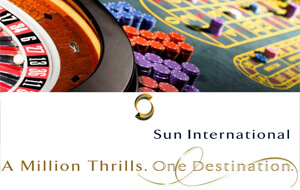 In line with its announcement last year to sell off part of its African casino interests, the global casino and hotel group, Sun International said many of the conditions in the process have been fulfilled. In August, Sun International said that it would be reducing its stake in its African interests to between 20 and 50% (depending on the country). As such, conditions for the sale of operations in areas such as Lesotho, Botswana and Zambia have already been met and a lot of progress has been seen in these areas.

The group said that while elements of the Swaziland and Namibian deals have been slightly delayed for reasons beyond Sun International's control, the process is nevertheless continuing, with tweaks to the original deal being made to match the reality on the ground.

Despite the fact that Sun International will be selling off part of its African portfolio, it will still provide management services to the casinos and hotels. The African assets were sold to the Thai listed Minor International Public Company Ltd, which owns and operates hotels around the world.

The deal, considered to be worth nearly R664 million, will mean that Sun International will own 20% of the hotels in its African portfolio, and 50% in its Zambian interests. The group believes that by shedding some of its African assets but still keeping a foot in the literal door, it will be able to continue to enhance its strength as a casino operator and take full advantage of the growth opportunities in Africa's growing gambling market.

In order to facilitate the advancement of the deal, Sun International and Minor International opted to change the original terms of the deal so that the Swaziland element is kept out for now. In addition, they will be leaving out the Namibian component for now as well, since the deal is still dependent on regulatory approval from local authorities.

In a press release earlier this week, Sun International said that:"the parties continue to work towards completing the Namibia and Swaziland components of the transaction within a reasonable time period."

2014 has been a good year for Sun International in terms of financial performance, with growth since the end of February 2014 recorded at 48%. Last month, share prices for the Johannesburg listed company reached a 12-month high of R132.

This entry was posted by on Friday, 02 January 2015 00:00 in blog Blog subscribe
Leave a reply
You are not allowed to leave a reply!