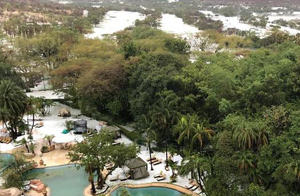 After being battered by a freak storm, Sun International’s flagship resort, Sun City, is open for business again. Earlier in December, a massive storm battered the North West region of Pilanesberg, including Sun City. A hail storm caused massive damage to hotel rooms, cars and other buildings at Sun City. Visitors who were visiting the resort for the day were transported back home, while overnight visitors were given alternative accommodation while mop up operations began.

This week, it was announced that Sun City was once again in operation.

“Over the last 48 hours, we’ve managed to deal with the mop-up operation to get the resort back into a decent shape for visitation by both hotel guests and day visitors,” said the group executive for Sun City, Raul de Lima. “The Valley of the Waves and Sun Central restaurants, including the retail mode, is open for business and most of the facilities are up and running again.”

But while most of the facilities are now in operation, there still remains a shortage of hotel rooms due to the damage caused by the storm. Some 100 rooms at the Soho Hotel are out of commission, and a further 40 rooms at The Cascades cannot be occupied just yet.

The executive praised his staff and the contractors who rushed to begin the big cleanup at one of the busiest times of the year so that Sun City could minimize damages and cause as little discomfort to its guests as possible.

“For that we are very thankful. We would also like to thank all our guests and customers who have been understanding and sympathetic to what took place, given that it was a freak storm,” said de Lima. “For their indulgence and certainly their patience, we are very grateful and would like to thank them very much.”

A Capetonian visitor to Sun City, who was present during the storm, described the freak storm as “a rolling ball of bad weather”. He said that the Cabanas Hotel had been submerged in ankle-depth water and that people queued at the only functioning restaurant to get something to eat.

This entry was posted by on Wednesday, 02 January 2019 07:51 in blog Blog subscribe
Leave a reply
You are not allowed to leave a reply!