Springbok Casino Recognises Pay Dirt as Game of the Month 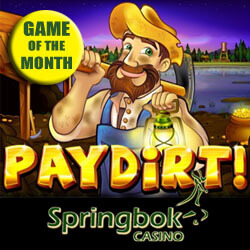 Pay Dirt has been named the new Game of the Month at Springbok Casino in recognition of the big win it paid out in January to Carol Z. In a single spin, Carol took home an impressive R168,225 which was the beginning of a winning streak for the day. In total, Carol won R346,850.82 by switching between a number of different games at the casino. She wagered a total of R5,275 to achieve her win. This has prompted Springbok Casino to name Pay Dirt as 'Game of the Month' for March.

"Lots of players believe that when a game is hot, just keep on playing it," stated Daniel van Wyk, casino manager at RTG-powered Springbok Casino. "So, we made Carol's game our Game of the Month. If she can hit pay dirt on Pay Dirt then maybe someone else can as well."

There are a range of exciting offers as part of the Game of the Month promotion this month at Springbok Casino. Freeroll tournaments, free spins and up to R3,000 in bonuses are likely to attract a number of new and old players.

All players who wager on Pay Dirt during the month can take part in the freeroll tournament which will be running until March 31. The freeroll has a prize pool of R10,000 for all players to play towards.

Pay Dirt is a 5 reel, 25 payline progressive jackpot slots game. Developed by RTG, it includes a range of exciting bonus symbols and bonus rounds to increase your chances of winning. The game is suitable for all bankrolls with a betting range of 0.01 to 5.00 per payline.

Pay Dirt is set in the gold mines with symbols including a mine, a miner, a bandit, a mining cart, a donkey, a dog, dynamite, a lantern, a pick axe and a gold pan. Players are sure to get into a gold mining spirit playing for the free spins bonus round, the maximum payout on the base game of 10,000 coins or the random progressive jackpot which can be triggered at the end of any base game. Visit SpringBok Casino today | Read our SpringBok Casino Review

This entry was posted by on Monday, 09 March 2015 00:00 in blog Blog subscribe
Leave a reply
You are not allowed to leave a reply!