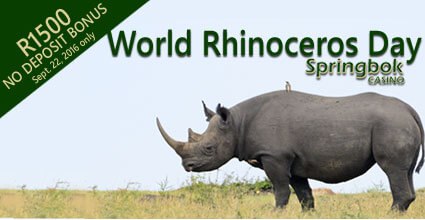 World Rhino Day is September 22nd and South Africa’s Springbok Casino is paying tribute to the magnificent Rhinoceros, one of the most endangered species of the country’s Big 5.

All players that make a deposit in September can claim a R1500 World Rhino Day bonus on September 22nd. This is a no deposit bonus so once a qualifying deposit has been made earlier in the month no further deposit is required.

“There is a special Rhino that we often post about on Facebook,” said Springbok manager, Daniel Van Wyk. “Our players love him. His name is Osita and he lives in a wildlife reserve near Cape Town. I had a chance to visit him on a recent vacation. It was a humbling experience. What a magnificent animal!”

Osita is a resident of ARC (Aquila Animal Rescue and Rehabilitation Conservation Centre), a sanctuary for animals that can never be released into the wild again and a temporary home for those who need attention before being released into the wild. There are lots of photos of Osita on the Centre’s Facebook page where there is also information on the group’s wildlife rescue and rehabilitation projects.

Springbok Casino, where customer service is offered in both English and Afrikaans, has hundreds of online slots and table games from Realtime Gaming (RTG), all played in Rands. In the newest game, Panda Magic, scatters trigger up to 30 free spins where all payouts are doubled. Like all of its most popular games, Panda Magic is available in Springbok’s mobile casino for smartphones and tablets. Visit Springbok Casino Today | Read our Springbok Casino Review

This entry was posted by on Tuesday, 13 September 2016 00:00 in blog Blog subscribe
Leave a reply
You are not allowed to leave a reply!