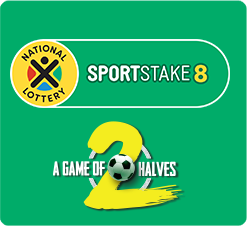 Sportstake 8 is a game conducted by the ITHUBA National Lottery. You have to predict the first half and second half outcomes of eight given soccer matches. The official fixtures list is drawn from professional soccer leagues mainly of South Africa, United Kingdom, Spain, Germany, France and Italy.

There are three methods by which you can play.

You have to make at least one prediction for each half of each fixture. One full bet slip will have at least 16 predictions in all.

There are three possible outcomes in each prediction box.

You can make up to three predictions for any half of any fixture, that is enter (1), (X) and (2) or any two of those. You will have to indicate Multi-Play on the bet slip.

The score at the end of each 45-minute half including referee’s added time, but excluding extra time or penalty shootout, will determine the outcome of the half.

What if a Fixture is Abandoned or Cancelled?

If a fixture is abandoned, cancelled, rescheduled or postponed after the list is published but before the match starts, then all selections for that fixture will be settled as correct.

When to Buy SportStake Tickets

You can buy Sportstake tickets every day during the normal business hours of the lottery retailer. The sales will close half an hour before the commencement time of the first announced fixture.

There are three draws every week as follows.

The cost of one board is R2 inclusive of VAT. The maximum that you can bet for one draw is R2000.

Normally, ITHUBA allots 50% of the net sales from the bet slips for the prize pool. There are four divisions, which are allotted a share of the prize pool.

Winners can collect prizes as follows: