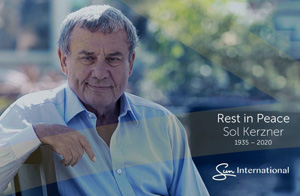 Sol Kerzner, the iconic founder of the Sun International hotel and casino group, Sun International, passed away at his home on March 21st, at the age of 84. He had been suffering from cancer.

A statement made by the Kerzner family spokesman, Ian R. Douglas, called him a “maverick” and a “titan of the hotel and resort industry who redefined the scale and scope of integrated destination resorts worldwide.”

Sol Kerzner founded Southern Sun and Sun International, two of South Africa’s greatest hotel and casino groups. He significantly impacted the tourism industries of several other countries, including Mauritius, Dubai and the Bahamas.

“Sol’s career in hospitality began in 1962 when he decided to leave the accounting profession and purchased The Astra, a small inn in Durban, South Africa,” said Douglas. “He quickly transformed this rundown establishment into one of the most popular hotels in the area, a success that whetted Sol’s insatiable appetite for innovation and demonstrated a trademark ingenuity that would define his 60-year career.”

After purchasing the Astra, Kerzner went on to open the country’s first five-star hotel, the Beverly Hills. He was only 29 years old at the time. Kerzner then went on to launch the R7 million Elangeni Hotel.

In 1969, the visionary approached South African Breweries with the idea to develop a chain of hotels. This was the start of the Southern Sun group, which, by the middle of the 1970s had 30 hotels in its portfolio.

Sol Kerzner’s most stunning achievement, however, was the development of Sun City in the homeland of Bophuthatswana. The R35 million resort offered two casinos, an 18 hole golf course and, further on in time, four new hotels and a SuperBowl arena. Sun City was not without controversy, and weathered intense boycotts by overseas groups who used the resort as a scapegoat to express their criticism of the apartheid government. However, Sun City went on to weather the storms, and is still considered one of South Africa’s most popular casino and hotel resort.

Kerzner was married four times and had five children. His son Butch (Howard) Kerzner, who was instrumental in taking Sun International onto the New York Stock Exchange, tragically died in a helicopter crash while checking out property sites for his father’s company in the Dominican Republic.

Sol Kerzner’s died at his home in the Leeukoppie estate, his last personal development project which features 48 luxury homes on the Atlantic Seaboard.

This entry was posted by on Monday, 23 March 2020 09:19 in blog Blog subscribe
Leave a reply
You are not allowed to leave a reply!