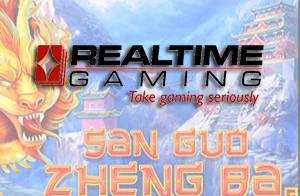 The online casino software group, Realtime Gaming has told the industry that it has chosen a new executive for its operations in Asia, as the successful group continues to expand and grow in the global market. According to Real Time Gaming, Alex Czajkowsi has been appointed as the group’s new Corporate Marketing Officer for Asian operations and will be located in Manila, the Philippines.

The chief executive officer of RTG Asia, Charlotte Tang said about Czajkowski that he was “leading the charge to re-position RTG Asia as more than just ‘more slots’, bringing innovative, new player experiences to i-gaming operators that improve the players’ experience and drives real profit to their bottom line.”

In an industry briefing this week, Alex Czajkowski said that he had worked with Real Time Gaming for the last 14 years, and he was therefore excited to join the new Asian team which was “focused on increasing player lifetime values for the region’s operators. He added that RTG encompasses new technologies for “engaging, entertaining and monetizing players.”

Tang mentioned games that RTG has rolled out, including a series of games based on Jackie Chan movies and the innovative 4D Fish Attack.

“These are the types of games that win new players over and keep existing players coming back,” she said.

The announcement of the new executive comes on the back of the release of the new San Guo Zheng Ba slot that was released to RTG powered casinos this week. The game has already taken the industry by storm as it whisks players back to the days when emperors ruled ancient China.

The visually stunning game is packed with fantastic bonus features, including wilds, multipliers, free games and Super Spins that help players take control of the ancient dynasty and win the biggest treasure of all – the rule of China.

The San Guo Zheng Ba feature is triggered when players land three or more Scattered Emperor symbols on the reels and they earn themselves five free games. This feature can be re-triggered up to five times. At the end of the feature, the Super Spins feature is activated and upgrades such as wilds and multipliers occur.

This entry was posted by on Thursday, 31 May 2018 09:16 in blog Blog subscribe
Leave a reply
You are not allowed to leave a reply!