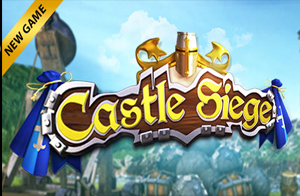 There is an exciting new slot game to be played at Slotland Online Casino. Castle Siege is the title of the new game which went live at the innovative Slotland this week, and promises to be a big hit with its popular medieval theme, great graphics and the chance to win big. The captivating Castle Siege slot promises adrenaline-pumping action across its five reels and 30 pay lines as players do what they can to siege the castle and head across moats and walls to grab the treasure chests that contain mountains of gold.

Symbols on the reels include everything that you’d associate with a theme that screams Middle Ages, including armor, crowns, calligraphy and a castle surrounded by a moat. Players need to sharpen their swords, don their armor and strengthen their spirits as they head out to meet the royal guards protecting the castle and beat their way in. Look out for symbols such as the Knight’s Helmet, the Orb, the King’s Crown and the Silver Chalice – all of them being high paying icons which could add plenty to your bankroll.

Castle Siege slot caters to all players since bets begin very low (just 0.02 per spin), and could climb to 37.50 per spin for those players who like to add a challenging edge their gameplay.

Slotland Casino’s new Castle Siege slot boasts lots of opportunity to win thanks to the wild symbols and bonus features.

The Wooden Shield Wild symbol stands in for all other symbols (except the scatter and bonus icons) to form winning combinations. During the free spins round, the Sticky Wild feature is triggered, allowing the wild symbol to stay in place and clone itself in neighboring positions on the reels. If you land three or more bonus scatter symbols anywhere on the reels, the Catapult Bonus game is activated, where players are provided with ammunition they need to destroy the castle, one wall at a time. Players who are skilled enough to hit the gunpowder room are well rewarded since the castle will blow up. If you are lucky enough to venture across the moat and enter the castle, you’ll reach jackpots – namely Mini Jackpot, Major Jackpot and Grand Jackpot. The higher you bet, the better your chance of winning a bigger jackpot.

This entry was posted by on Friday, 20 April 2018 11:02 in blog Blog subscribe
Leave a reply
You are not allowed to leave a reply!