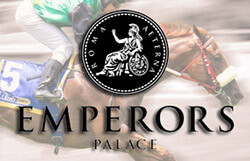 The 2014 Emperor's Palace Ready to Run Sale, which will see the sale of over 110 thoroughbred horses in Johannesburg, has been scheduled for November 2nd. The 110 horses will be offered for sale at the Thoroughbred Breeders Association Sales Complex and will be run by the auction company, Bloodstock South Africa.

The day before, on Saturday, November 1st, the Emperor's Palace Ready to Run Cup will be held at Turffontein Racecourse, and this year's event is expected to be worth close to R4 million. The participants in this year's race will be of the Bloodstock South Africa 2013 Sale, and 16 runners will vie for payouts in the top ten spots.

The biggest contributors to this year's Ready to Run Sale is the Mooi River based operation, Balmoral Stud, owned by Marc and Nicola Coppez. The operators will offer 70 top class sires from around South Africa and out the country. Other contribors to the sale are Ambleway Thoroughbred Stables, Nutfield Stud and Lammerskraal Stud.

Early last month, one of the biggest contributors to the sale, Summberhill Stud announced that it was withdrawing its draft of nearly 120 horses from the Ready Run Sale, and would instead sell their draft through Cape Thoroughbred Sales

A statement issued by TBA regarding the incident said: "I have received notification from Mick Gross that Summerhill are withdrawing their draft from the Bloodstock South Africa's Emperor's Palace Ready to Run Sale 2014."

A statement was also issued by Goss who said: "I feel that the number of lots on the sale should be restricted to no more than 200, bearing in mind that the rich sales race attached to it is limited to just 16 runners. Last year's catalogue was increased to almost 250 and this year's total came to 230. Therefore, the more horses entered for the sale, the less attractive it becomes to the buyer."

Goss said that an agreement had been reached between himself, the TBA and Emperor's Palace Casino, sponsors of the sale, that 2014 catalogue would be limited to 200 lots. However, when he saw that the sale's operators were not keeping their word, the decided to withdraw Summerhill Stud's draft of 120 horses.

"When I objected to this year's number of entries and levy, the reaction from the TBA was that these would only be discussed again after the sale," said Goss.

This entry was posted by on Monday, 13 October 2014 00:00 in blog Blog subscribe
Leave a reply
You are not allowed to leave a reply!