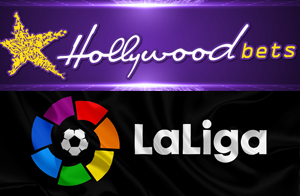 The top professional football division of the Spanish football league system, known as LaLiga has announced its first sponsorship deal with a South African brand. The local Durban-based sports betting company, Hollywoodbets, signed a deal with the league until the end of the 2019/2020 season to become an official LaLiga Betting Partner.

Under the terms of the deal, the Hollywoodbets brand name will appear during LaLiga matches on digital board replacements and the 3D carpet.

LaLiga has committed to invest in the South African football market and already helps develop the game at a local level.

The operations executive at Hollywoodbets, Sandisiwe Bhengu said that the sportsbook was proud to be a partner of one of the best football leagues in the world.

“South Africans are devoted to football and LaLiga is widely enjoyed throughout the country,” he said. “We are confident that this will be a long-term and effective partnership with LaLiga. As a company that believes in investing in our communities, we look forward to touching more lives in collaboration with a brand like LaLiga that shares in this vision. We are confident that this is the beginning of a new era in South African football entertainment where our future SA stars will be touched anew by their international football heroes.”

Also commenting on the new deal was the LaLiga South Africa Managing Director, Marcos Pelegrin who noted that strategic partnerships such as these help the league penetrate and expand across new markets. He added that LaLiga wants to keep growing in the South African market as it endeavors to increase is fan base and bring the league closer to its fans.

Pelegrin said that the partnership allows LaLiga to keep working on developing football in local communities such as Mzansi, Soweto, Polokwane and Port Elizabeth.

“This has been a shared driver for both brands to partner on, and it is also an important objective for Hollywoodbets,” said the MD.

This entry was posted by on Thursday, 27 February 2020 10:29 in blog Blog subscribe
Leave a reply
You are not allowed to leave a reply!