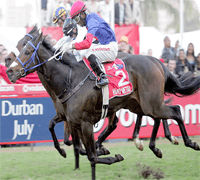 South Africans placed a record number of wagers on the recent Vodacom Durban July race at Greyville this year, with bookmakers reporting that the total net tote turnover was R127 million. The numbers were an 11.34% jump compared to the race last year.

According to SportingPost, Pick 6 mania reached its peak on the Saturday morning of the Durban July and boosted tote betting significantly. The horse racing newspaper said that the final tote net Pick 6 pool (including R3 million carried over) was R13,766,536. Compared to last year, this was an increase of over 200%.

Vee Moodley, betting executive with Phumelela horseracing and betting company, said that the group was delighted with the turnovers accomplished.

"The Pick 6 carryover and resultant record Pick 6 pool played a key role in driving interest in this year's event. And the most pleasing aspect of all, is that it attracted new money, instead of simply drawing money away from other pools," said Moodley.

"Total tote betting on the Vodacom Durban July was virtually flat on last year, but this was understandable in light of 16 runners as opposed to 20 last year. And the race did generate the first-ever R10-million Quartet pool in South Africa."

Other companies also posted good numbers. BiPot, the new bet by TAB and TABGOLD generated a pool of R740,782. It was not possible to compare these numbers from last year since the bet was not in operation in the Vodacom Durban July of 2013.

Organizers were pleased that, for the first time ever, the Durban July generated the first R10 million Quartet pool in the country's racing history. The pool tipped just over the magic number at R10,655,8423.

The Vodacom Durban July traditionally takes place on the first Saturday every July, drawing the best thoroughbreds in South Africa. 55,000 people crammed Greyville to watch the race, which was also viewed by millions of spectators on national TV.

This entry was posted by on Tuesday, 15 July 2014 00:00 in blog Blog subscribe
Leave a reply
You are not allowed to leave a reply!