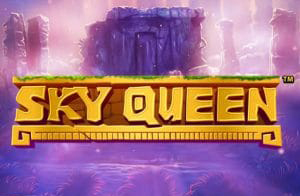 When the online casino software group, Playtech, releases a new title, it always creates quite a stir among players. Its games are unique, exciting and fun to play. That is one of the reasons why Playtech’s new Sky Queen slot, released around Easter time, has been welcomed so warmly among players. The five reel is everything that Playtech fans have come to expect from the software provider – and more.

The game is themed around the leader of a mythical civilization in the South American jungles. You’ll find symbols that are reminiscent of the Mayans and the Aztecs on the reels of this game. The Sky Queen herself is the bonus symbol in this game, and she appears alongside Sun and Pyramid scatter symbols. Other images include decorative bowls, magical emblems and jaguars.

Sky Queen slot boasts a massive fifty fixed pay lines. At the very least, you can wager just 0.25 per spin but if you’re up for the challenge, you’re looking at 500.00 per game!

As far as bonus symbols go, the Sun symbols are your key to the very unique Fire Blaze respin bonus features. You can trigger this feature by landing six to 15 sun symbols. The respins can release cash prizes or Jackpot Star symbols which remain in place for the next three re-spins. The number of cash prizes you win is determined by the number of Sun symbols that appear. You can win the top prize (the Grand Jackpot) by filling the reels with Sun symbols. If you place the maximum stake on each spin, you could potentially win the top bonus – a cool seven-figure sum that could turn you into an instant millionaire.

The Sky Queen is the wild symbol that substitutes for all other symbols except Sun symbols and scatter symbols. Wild symbols only make their appearance on the 2nd, 3rd, 4th and 5th reels during the base game. They can, however, appear on all the reels if you’re playing during the free spin feature (triggered by three or more scatters).

Look out for the new Sky Queen slot at South African-friendly online casinos such as Casino.com and others.

This entry was posted by on Thursday, 02 May 2019 10:24 in blog Blog subscribe
Leave a reply
You are not allowed to leave a reply!