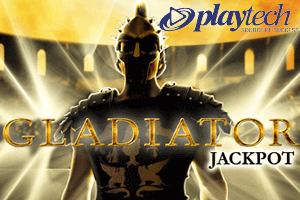 One of the most popular games by online casino software provider, Gladiator, has just seen its progressive jackpot pay out a hefty six figure sum to one lucky player. Although the details about the winner are still not clear and it not yet known which Playtech powered online casino hosted the big win, what can be said is that the Gladiator jackpot paid out $713,427 (R7.1 million) to the winner. As such, this puts the jackpot in the top ten payouts of the slot game since it was introduced.

Gladiator Jackpot slot is carried by many Playtech casinos, including those enjoyed by South African players such as Winner Casino.

Gladiator has a history of paying out big prizes to lucky players and it is not unheard of for the top payout to be over R10 million! The highest prize ever recorded through Gladiator slot's progressive jackpot was a R30 million payout in October 2013.

The popularity of Gladiator slot is not only due to its high paying jackpots - although this is a definite pull factor to the game. Playtech, along with most other software companies, recognized a long time ago that players are attracted to familiar brands. As such, the group signed a licensing deal to create an action packed branded slot game based on the Ancient Roman themed multiple Academy Award winning movie of the same name. The movie was released in 2000, and brought to the big screen the tale of General Maximus and his fight to the death in the gladiator rings of Rome as he seeks revenge for the death of his family.

The excitement of the original movie is brought to life through stunning imagery on the reels, including original footage. Gladiator progressive slot also abounds in bonus features, including a Coliseum free spins games which is activated when players land three or more scatter symbols on the reels. Up for grabs of free games, multipliers, extra scatters and extra wilds which are added to the reels.

In addition to the free spins round, another Jackpot round is activated by the Gladiator Helmet. Players are asked to reveal helmets, and if they reveal nine Gold Helmets, they win the big jackpot, as was the most recent case of the Gladiator jackpot win.

Players can check out the game and other top notch titles at sites such as Winner Casino, which offers a new player bonus of 200% up to R2,000 on a deposit of at least R400 or more.

This entry was posted by on Monday, 07 September 2015 00:00 in blog Blog subscribe
Leave a reply
You are not allowed to leave a reply!