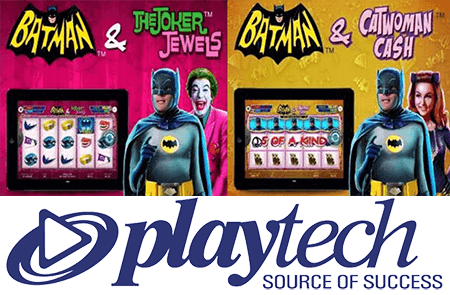 Playtech, the online casino software provider whose games are found at popular sites such as Casino.com, has announced that it plans to roll out a series of new slot games in the coming months. Fans of the superhero Batman will be thrilled to learn that a deal signed between Playtech and Warner Bros Consumer Products (on behalf of DC Entertainment), will result in two new games based on the capered figure. The games will reflect imagery and scenes from the classic Batman TV series of the ‘60s, and form the first of several slot games planned by the group.

Playtech said that besides the launch of Batman and the Joker Jewels and Batman and Catwoman Cash, new desktop and mobile progressive games are expected to be released by the end of this year and into early 2017. The games will also be based on DC Comics superheroes, and all of them will be linked to a superhero jackpot which has the potential to pay out life-changing sums of cash.

The chief operating officer of Playtech, Simon Akad said that the company’s announcement this year at an international gaming convention that it planned to release these games, generated much excitement and global demand in anticipation for their launch.

Akad said that he was “extremely proud” of the collaboration between Warner Bros and Playtech’s innovative development studios.

“The Batman Classic TV Series games, that will be rapidly followed by Superman I, Superman II, and Man of Steel and a whole host of other DC Super Hero branded games, are a premium addition to our best-performing range of the industry’s leading progressive jackpot slot content and will provide our licensees and DC Super Hero fans with the Ultimate Batman gaming experience,” he said.

This entry was posted by on Monday, 24 October 2016 00:00 in blog Blog subscribe
Leave a reply
You are not allowed to leave a reply!