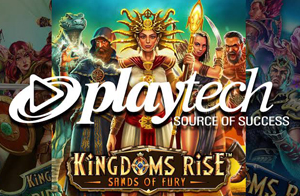 The latest new innovation in the online slots world comes from the software and games developer, Playtech which recently launched its new Kingdoms Rise games suite. This fantasy-themed series already boasts three fantastic games that are linked through their story line as well as their in-game tokens. Players can win these tokens during gameplay and then redeem them at the Kingdoms Rise Features Shop, where they can unlock extra content – for extra rewards potential and entertainment value.

The casino director at Playtech, James Frendo, pointed out that innovation has always been at the forefront of the group’s games development process, and Playtech was proud to be delivering an “industry-first concept” for players and licensees.

“The suite’s token system gives players the power of choice like never before – they decide what feature to play, when to play it and in which game,” said Frendo. “Some players may want to try a feature as soon as they have enough tokens; others may prefer to build up a balance and plays several features at once. The key point is, the choice is theirs.”

“For players, the chance to ‘earn’ extra in-game features and potentially significantly boost their win potential will be a key point of differentiation,” said Frendo. “The opportunity to gain more tokens, which can be redeemed in any Kingdoms Rise game, is a clear incentive to try all games in the suite.”

This entry was posted by on Wednesday, 27 November 2019 11:36 in blog Blog subscribe
Leave a reply
You are not allowed to leave a reply!