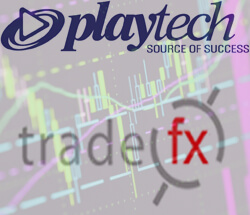 Playtech, the online gambling group which provides games to multiple online casinos such as Casino.com and others, has announced its intentions to enter the foreign exchange trading market by buying up a majority share in TradeFX. Playtech will become a 91% shareholder of the company which is majority owned by Playtech's founder, Teddy Sagi, who also has a 33.6% stake in Playtech. The company will pay an initial €208 million for TradeFX. If the company reaches certain performance targets by 2017, Playtech will pay a further €250 million to TradeFX.

TradeFX deals in difference and binary options trading, which is becoming an increasingly popular form of online financial betting.

The chief executive officer of Playtech, Mor Weizer said about the deal that "in addition to being immediately and significantly earnings enhancing, the payment terms for the acquisition are weighted towards future financial performance in the business."

Weizer also said that TradeFX's "proven management team has a strong cultural fit with our business and is incentivized to stay with the enlarged group."

He said that Playtech looks forward to working with TradeFX's team to create additional shareholder value.

TradeFX employs 500 people and is in the process of applying for a license from the Financial Conduct Authority. The group is regulated in Cyprus.

This is not the first time that Playtech purchased assets from Sagi, who does not have a seat on the board of the company he founded. In 2011, Playtech bought PTTS software from Sagi for €298 million, and the next year entered into a €6 million per year licensing deal with the Sagi owned Skywind group.

Sagi is expected to get a £300 million windfall from the latest Playtech deal, replenishing his coffers after he spent £500 million buying Camden market in the UK last year.

Analysts have commented favorably on the latest deal despite the fact that "this is another related party transaction", according to Simon French of Cenkos.

"Teddy Sagi has proved to be a good source of deal flow which have contributed strongly to Playtech's success for the benefit of all shareholders," he admitted.

The deal is expected to boost Playtech's earnings significantly, with a rise of share values by 5% when news of the deal broke on Thursday morning.

This entry was posted by on Tuesday, 07 April 2015 00:00 in blog Blog subscribe
Leave a reply
You are not allowed to leave a reply!